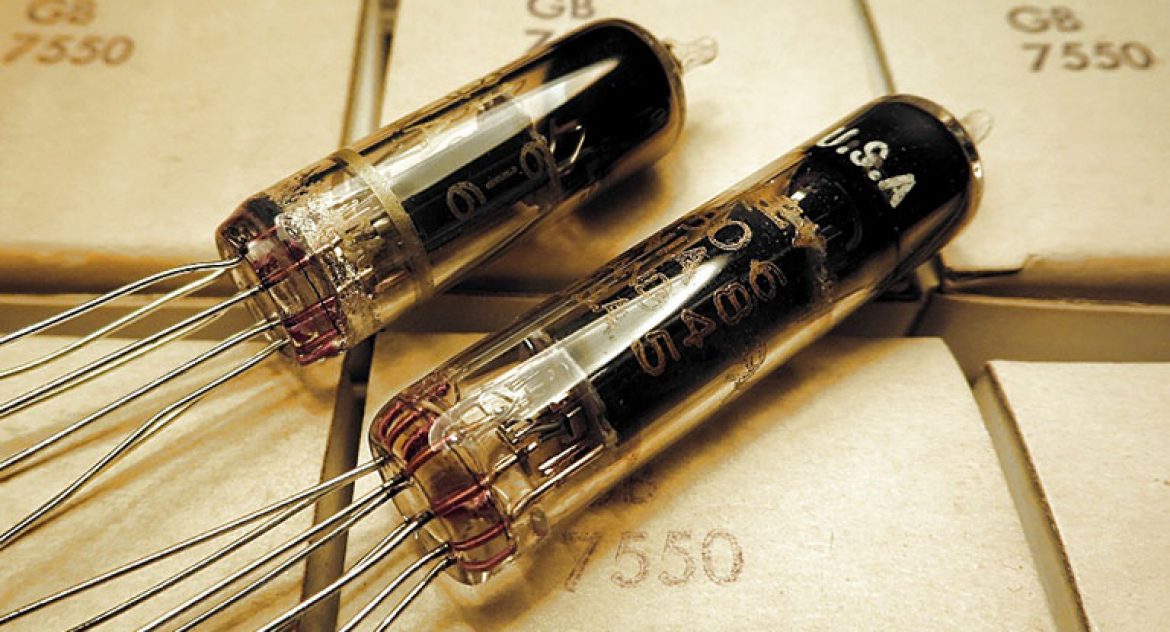 But being as this is a 7550 dual triode, the most powerful subminiature tube in the world…

…and would blow your speaker cones clean off, you’ve got to ask yourself one question: “Do I feel lucky?” Well, do ya, punk? Well, that’s exactly what I was asking myself when I purchased a small batch of these fantastic looking devices off Ebay. The seller had described them as a replacement for 6021 subminiature dual triode tubes. Interesting! Effectrode utilise subminiature tubes in our PC-2A compressor and other small effects pedals so it was literally just a matter of a few minutes before I caved-in and pressed the “Buy it now” button.

Athough I’d never come across this particular tube before I decided to take the plunge and purchased just over three dozen to ensure I had a representative sample set to test and experiment with. It’s pretty much impossible to draw any useful conclusions when testing just one or two tubes—statistical robustness can only be achieved with a reasonable sized data set. Or to put it another way, the more the merrier!

Now, I must admit I have more than a passing fancy with 1960s Sylvania “Gold Brand” tubes like these 7550s—it’s becoming an obsession, but not without good reason. Premium Gold Brand tubes were manufactured in Sylvania’s state-of-the-art 200,000 square foot plant in Burlington, Iowa. These were Sylvania’s top-of-the-line tubes, arguably the finest tubes in the world, featuring tungsten-rhenium alloy heater wires, high-quality spot welds, gold-plated grids and a guaranteed 10,000 hour life span, for all intents and purposes indestructable and impossible for tube anoraks to resist buying.

The tubes arrived swiftly in the post and I soon had the 7550 installed in my little test jig—a modified PC-2A circuit board on which I’d installed a ZIF (zero insertion force) socket. I was eager to begin putting the 7550 through its paces and see what it was capable of.

Although the 7550 has the same pinout as the 6021, the glass envelope is physically larger and the heater requires almost twice as much current. On power-up this tube gets hot, damn hot. I had been toying with making a modified PC-2A compressor based on the 7550, however was already having second thoughts about the idea as this little tube was running hotter than the 6V6 output tube in my Fender ‘Tweed’ guitar amp.

I then went on to apply a 1KHz test sinewave signal to the test jig and monitor the input and output on my oscilloscope. The 7550 was working as an amplifier with just a gnats whisker less gain the 6021. All good so far. I proceeded to test the rest of my newly acquired batch of super-tubes and found a couple of them with no output signal. Hmm… D.O.A. (Dead On Arrival)? That’s surprising. I’d never come across a dead Gold Brand tube before—another romantic illusion shattered. But that’s what these tests are for! We must carry on. Next: audio tests.

This is where the 7550 let me down. Well over 50% of my batch of 40 tubes were disappointingly microphonic. Significantly more microphonic than a batch of Sylvania 6021 tubes. In fact they’re some of the worst subminiature tubes I’ve ever come across, at least as far as microhponic pick up goes meaning they’re not going to perform very well at all in a preamplifier circuit. Not all triodes are meant for audio applications.

After some searching I managed to locate the manufacturer’s datasheet for the 7550. According to the datasheet the 7550 is “designed for pulse application only” and with plates rated at 2 watts dissipation (per plate) this means this tube is a little powerhouse capable of driving a substantial current pulse into a load. What that actually means is that the 7550 was intended for use, not in hi-fidelity class-A amplifier circuits, but in signal transmission applications where it would operating as a class-C amplifier, that is in R.F. (radio frequency) circuits such as an R.F. oscillator or R.F. amplifier. This is corroborated by the fact that there’s no quoted figure for amplification factor within the pages of the datasheet and no curves given for negative bias voltages where the tube would be operating in its linear region as an amplifier. Characteristic curves are only shown for positive grid voltages in the order of tens of volts. In other words ths grid is being driven hard to turn the tube ‘ON’—pulse operation, where the tube is effectively operating as a switch. In such a pulse circuit the tube would be biased below cut-off (‘OFF’ so there’s no current flow) and then a driving voltage applied to the grid to make it conduct (‘ON’ so there is no voltage drop across the cathode to plate).

Closer examination of internals of both tubes reveal that the getter in the 7550 is mounted at one point whereas the getter in the 6021 is mounted at two points. The purpose of the double mount is to stiffen up the electrode geometry, to prevent electrodes in the 6021 from moving relative to one another and minimise sensitivity to external vibration pick up. The 6021 tube was designed for amplification applications, however the 7550 was not, and therefore there was no need to engineer it to be especially immune to vibration pick up by stiffening up its electrode geometry. In operation this tube would be pumping out large current pulses in the order of hundreds or even thousands of milliamps. Any tiny external vibrations that would adversely affect the performance of a precision analogue amplifier would have no significant effect on class-C pulse circuit.

On a final note, the 7550 might possibly be suitable for use in an output driver section or perhaps a phase splitter, that is, in an audio circuit where the input signal has already been amplified to a high level, but not for hi-fidelity amplification of low-level signals. To summarise, although the 7550 is certainly not a good choice of tube for a preamp section—in all fairness the designers never intended it to be utilised for this purpose anyway—the Sylvania Gold Brand version of the 7550 is a superlative example of 1960s engineering. Now all I need to do is dream up a new effects pedal circuit that requires a tube capable of generating large current pulses…