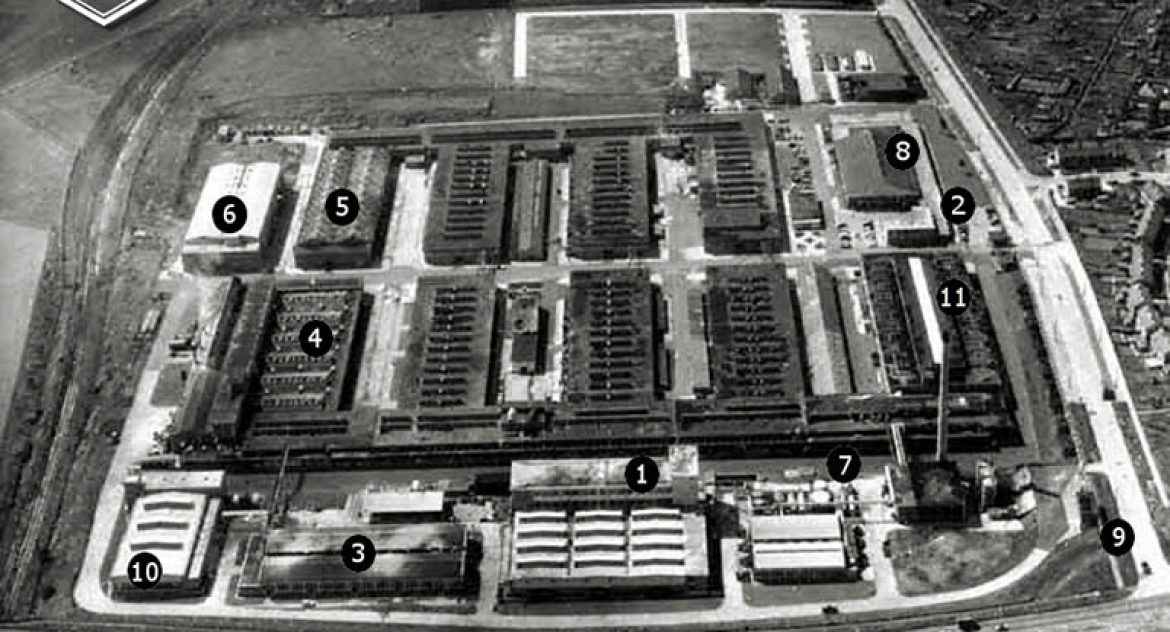 Not being able to gain access to the heart of the site meant some additional homework was required to fully determine the lay of the land. Using this photograph (provided by LET for use in the Cotton Town digitisation project) that shows a superb aerial view of the entire 46 acre Mullard Blackburn site (probably taken in the 1960s) and an old film documentary about the works, I was able to deduce something of where the various factories and plants were situated on the site. The glass and wire factories and chemical manufacturing plants can clearly be seen situated along the foward looking and optimistically named road, ‘Challenge Way’. The wire factory was built to produce high-grade tungsten and molybdenum wire used in the construction of tubes.

The other buildings on the site were factories for the manufacture of electronic components such as capacitors and three-legged fuses, er I mean transistors! As Mullard improved their production process, a new production line would be built in another building, therefore, a buildings’ purpose, and what was made inside, changed over the years. Mullard named the buildings alphabetically as shown in this bird-eye view of the site. ‘H’ building (the canteen) and ‘I’ building are no more, however the other buildings on the site still stand today and are being utilised for various actvities – nothing as magnificent and grandiose as tube manufacture though. Glenfield House and the surrounding buildings are now a distribution facility and one floor of Ribble House is in use as a call centre. Many of the other buildings, such as the chemical workshop are empty and derelict or have fallen into a sad, ruinous state. There’s evidence of demolition work too. In some parts of the site where vast workshops once stood there are now either heaps of rubble and broken masonry or just empty spaces – the oxygen and hydrogen production plant has completely disappeared to be replaced by a tatty looking car park.

Tatty car parks, tatty, run-down, semi-derelict buildings, rusting machinery and rubble, to the casual observer this is nothing impressive, just another boring old, run-down industrial estate. The Mullard Blackburn site is now utilised for various mundane business activities – not even ‘proper’ industry or real engineering. I wonder that I’m the only person on the site who’s aware of it’s glorious past – it was one of the largest and finest vacuum tube manufacturing facilities in the world. The place where those extremely desirable and ever more expensive N.O.S. (new old stock) Mullard ECC83 tubes coveted by audiophiles originated. Seems like I’m half a century too late. If only I could reach back into yesterday and retrieve a few tubes to bring back to today. There are stories that countless tubes were scrapped and buried somewhere on the site when production ceased and the factories shut down. Unused, mint tubes buried and preserved – a time capsule. Perhaps it is possible to reach back in time after all? Part 7: Tubes in the Rubble and Ruins

Hi, thanks for writing this article, it was very interesting to read. I myself have worked in ribble house on two separate occasions, once from 2011-2013 until the company went bankrupt, and again a couple of years ago, until they moved to a more convenient site. When I was first employed there and the company went into administration, I had the opportunity to explore almost the entire grounds as freely as I wanted, as we had to move a lot of equipment. I know ribble house like the back of my hand. There are so many little hidden rooms it's incredible. There is even a fully lit, indoor football pitch and several separate badminton courts in the basement.I still work very close by, at Blackburn chemicals just across the road, and working with a lot of older local people, they all tell me of how Mullard used to be like its own community back in the day.There has been quite a lot of development on parts of the site in the last year or so, not to my liking unfortunately as they are trying to modernise the look.I will keep my ears peeled for any rumours of buried vaccum tubes!

Hi Joshua, Thank you for sharing your memories of Mullard. It's fascinating stuff, particularly to find out there were badminton courts in the bowels of Ribble House. I'd heard that Mullards were a good employer and looked after their staff reasonably well too. It paints a picture of a more social Britain, of better times. If you have any more information at all do feel free to post here or write. These memories are all that remains of those halcyon days of British manufacturing… and do let me know if you find any tubes! Best regards, Phil