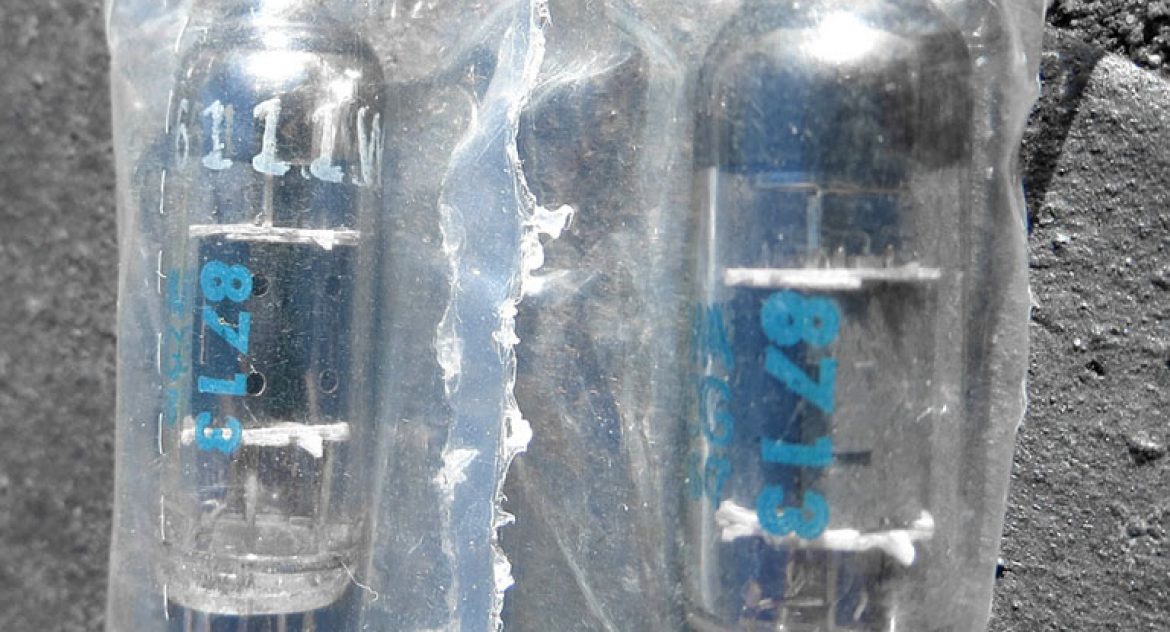 During a recent stock check of the Effectrode component stores (a.k.a. ‘Warehouse 13’) I came across the curious old artifact shown in the photo above. The picture shows two Philips 6111 subminiature tubes that were manufactured in Sylvania’s Emporium plant, Pennsylvania in the first quarter of 1987. Now, the odd thing is that both these tubes are from the same batch, but the plates appear to be fabricated from different types of material: one of the tubes has grey plates, which is typical of tubes made during this period, whereas the other has black plates. What possible explanation could there be for this throwback from Sylvania’s earlier manufacturing days?

Well, given that the Emporium plant ceased production of receiving tubes just a few months later after turning out these 6111s my best, and only, guess is that Philips were using up their old stocks of plate sheet. After all, these were the last 6111 tubes to roll off a production line that had been in continuous operation since the mid twentieth century—they were the end of the line. I must admit to having a bit of the ‘black dog’ in me as this marks the end of a glorious era in American tube manufacturing and perhaps the employees at the Emporium plant felt the same way too. This isn’t just conjecture or sentimentality on my part, my opinion’s based on a working experience of handling and testing tens of thousands of these tubes. These little glass devices have their own story to tell and I believe they can provide some insight into the working conditions behind those red brick factory walls at the time they were made.

Sylvania 6111 (and 6112) subminiature tubes are utilised in Effectrode’s smaller effects pedals, such as the PC-2A compressor (and Mercury fuzz). In our ongoing pursuit of knowledge concerning what actually makes a good tube (and hence good tone) we began keeping records of the tubes we tested but didn’t quite make the grade, that is, tubes that were rejected because they were considered unacceptably noisy or microphonic. As more and more test data steadily accumulated it became apparent that these ‘end of the line’ tubes, which are invariably printed with blue lettering, did not exhibit the same stellar characteristics as tubes bearing Sylvania’s green livery from earlier years. To be more exact, microphony and noise of blue print tubes is statistically higher than green print tubes, and for that reason we now only use Sylvania tubes manufactured prior to 1986 in our effects pedals.

Now, the microphony and noise in a tube are directly related to the tolerances and processing of materials utilised in the construction of its internal electrodes and, in large, depends on the care and attention taken during its manufacture. Tube manufacture is an exceedingly labour intensive process requiring a great deal of human involvement by skilled workers and it’s reasonable to speculate about what effect the looming closure of the Emporium plant might have had on the motivation of workers. One can imagine that as the factory wound-down in its twilight months the workers becoming more and more concerned about their jobs and what the future might hold. Surely this would have affected moral and motivation on the factory floor to some extent, and hence the quality of the tubes.

You may have heard the expression “Friday afternoon job” used at some time. What this turn of phrase essentially means is that workers on a Friday afternoon are thinking and looking forward to the weekend rather than keeping their mind on the job they are supposed to be doing, which results in poor quality work. We’ve all been there and, with all due respect to the workers at Emporium, the quality of blue print 6111 tubes that came off the line during the last couple of years tells a tale that there was something of the ‘black dog’ about the place, that all was not as well in the factory as it used to be in Sylvania’s halcyon days. But I don’t want to end my short story about Sylvania on such a downbeat note—they deserve better than that—so let me just finish by saying those folks at Sylvania really knew their stuff and you’ll be hard pushed to find a better subminiature tube than those made in the Emporium plant back in the day.

Really enjoy reading your articles on tubes, the article on black plates is very interesting. Would love to see one about long vs. short plates. Comments on the net are all over the place. Thanks

Thank you for your kind words Robert. All the best, Phil