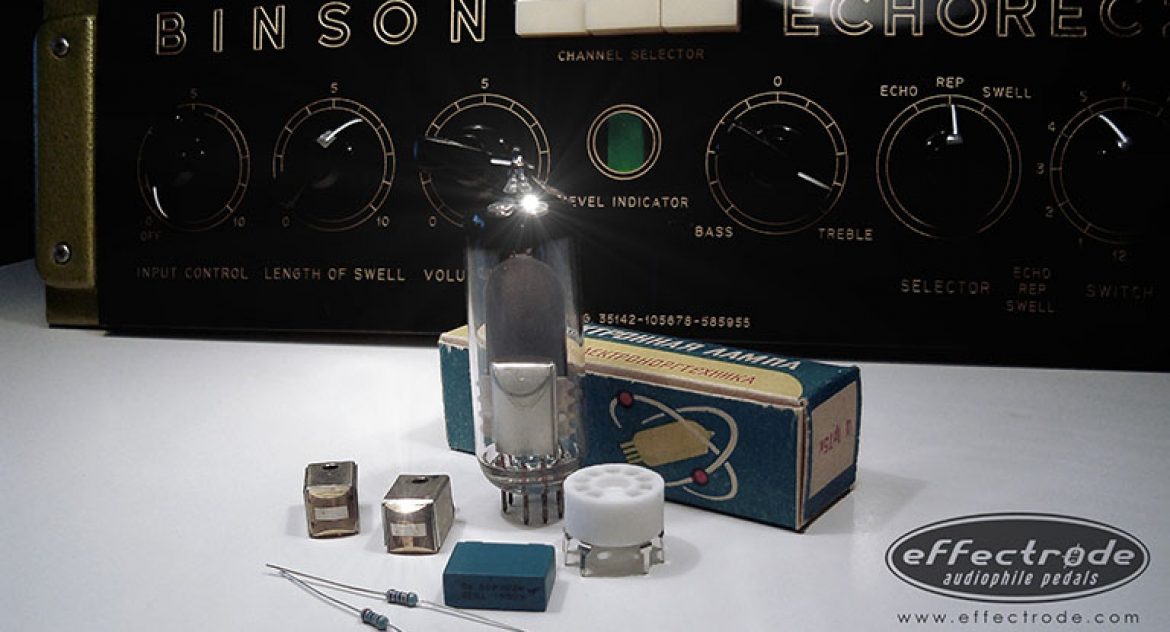 Sorry there’s not been a progress report on the Effectrode delay for sometime. This year we’ve been busy getting other pedals into production (Helios fuzz, new Tube Drive and Blackbird preamp), however I’m hoping to dedicate more time to the Effectrode delay project next year once the Delta-Trem tube tremolo is completed in spring. Some of the work I’m doing on the Delta-Trem will be used in the forthcoming delay – for instance, the tap-tempo control circuitry. So I kind of am working on it already! Also there’s something to be said for taking one’s time with a design as it allows me to take a more considered approach, explore different avenues, get other opinions and let ideas ferment – and nothing good is done in a hurry.

In the three years or so I’ve been researching this and planning I’ve talked to several knowlegable engineers, musicians and enthuisasts, some of which have had personel contact with engineers from Binson. For instance, David Bozzoni knew Dr Bini and several original Binson engineers and has been invaluable in providing technical and historical info. It’s important to me to have sense of the history and the people involved in the creation of the original Echorec – or it could be described as a sense of nostalgia. Anyway the spirit of this project is also very important – I want to create a product which reflects the obsessive detail that Dr Bini (Mr Binson) lavished on his products.

I’m also privileged to have had a few meetings with Steve Rothery (Marillion) and he has been kind enough to advise on what features should be included on the design. Additionally, Phil Taylor (Gilmour Music), who has been extremely invaluable in beta testing and fine-tuning many Effectrode pedal designs, will also have some input on this design. So I feel fortunate to be in such company, standing among giants of engineers and musicians. I cannot overemphasise the significance of having advice from such seasoned professionals in the design stage of a pedal. It’s reassuring to be able to talk to these guys. The devil (or God, depending how you look at it) really is in the detail and it is impossible to get all the details right without some external, objective help.

As usual, with all my other designs, I’m way behind schedule, but watch this space. It is happening!

Phil I will wait 30 years for your delay, I now own every effectrode pedal ever made with the exception of the Vibra Chorus, and its changed my life its the only way to play guitar. I even lost weight using effectrode pedals.

Thankyou for saying that Vince - you've made my day! All the best, Phil

Well... It's been well over another year since the last sign of life regarding the delay.. You certanly have a nice way to 'delay' things... ;-) How's the status? next week i'm picking up my PC-2A. I bought it second hand, so you can focus on the delay! ;-)

The Effectrode delay is still on the table, but still needs lots of development work to get it perfect. Will post more info as it happens.

Could you please put me on the list if I'm not already? Any news? I've been patiently waiting for what seems like eternity ;)

Hi Clint, There's still no release date for the delay, as I'm still busy with the Delta-Trem tremolo design. Perhaps I should call it the 'Eternity' delay...

Midi or no midi sync ? That is the question. Any price range at this time ?

That sounds a good idea. We're still in the development stage with this pedal so I'll look into he MIDI intereface. Price TBA

Can't wait for this piece of Art to come out !Lou

Holy! I'm super excited about the possibility of a tube delay. I appreciate you taking on this challenge and will snap one up when available. Also, I second the wating list proposition ;)

Phil, I'm probably more excited about the Effectrode Delay than I am any future effect out there right now. Glad to hear that it is still in the works, can't wait to get my hands on one eventually. Wanna go ahead and start a waiting list??? :) Thanks for all you do, your pedals are amazing. I keep your Tube Vibe on all the time in my setup, just turn down the depth all the way on non-vibe songs, and it is an incredible preamp section to run your signal through, tubes make everything better.

eagerly await more news on this. I wish you all the best in getting this to come to light. as a lifelong Echorec junkie I can't help but be excited for you. knowing effectrode quality this should be awesome. cheers!

Take your time and get it right! There are a lot of us that would rather see a perfect product later than a half baked one now.

Thankyou for the words of encouragement guys :)

Love hearing the updates Phil! Thank you for your commitment to doing inpired and inspiring work!

Thanks for the update, Phil. The mere fact that you had been mulling over a design for 'the perfect delay', based on, or rather inspired by, the iconic Echorec, has been a source of excitement for me this past year. I am confident it will be one special pedal indeed.