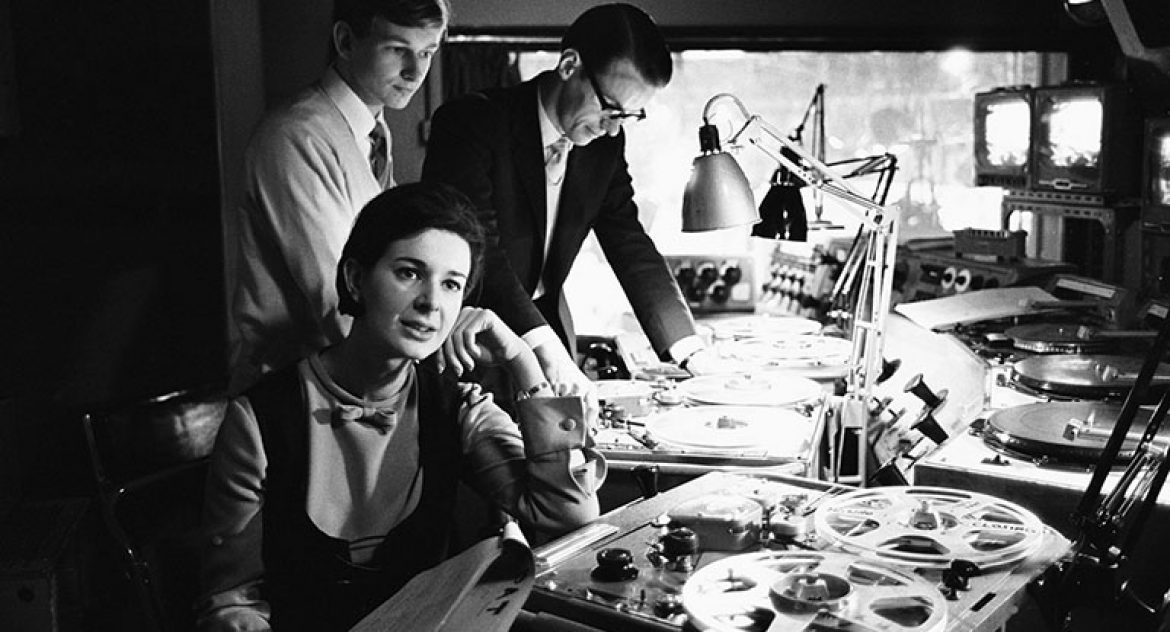 A beautifully crafted and nostalgic BBC drama – “An Adventure in Space and Time” – recently swept me back to 1963, a magical moment in time where the enthusiasm and creative energy of a handful of actors, set designers and engineers brought the TV series “Doctor Who” to life. The drama tells of how actor William Hartnell felt trapped by a succession of hard-man roles and wannabe producer Verity Lambert was frustrated by the TV industry’s glass ceiling. This extraordinarily detailed photo (taken 1963-4) shows Lambert along with Adrian Bishop-Laggett and Pat Heigham in the Sound Control room of Studio D, Lime Grove, BBC (sadly non-existent anymore, flats now stand on the site). If you look closely at the tape machine in the foreground you’ll see magnetic tape actually leaving the reel – a tape loop extending across the gallery and round a cine spool mounted on a pencil taped to a mike stand. This technique was later practised by a few of the more experimental rock groups to create rhymthmic patterns for their songs, for example, the song “Money” by Pink Floyd is based on a loop of seven different sound samples to create a 7/4 time signature.

The tape machines in the picture are EMI TR90’s installed into custom trolleys. The TR90 was a high-end professional reel-to-reel manufactured in England by EMI from 1957 through to 1962. These magnificient machines came at a hefty price tag of £625 which was a phenomenal amount of money at this time, more expensive than the Ampex 351 and the Leevers Rich series of stereo portable reel-to-reel recorders. The TR90 is a superb example of engineering excellence operating at 15 or 7½ i.p.s. with an amazingly fast start, making ‘spot’ cueing a reality. Although they where widely used in studios and broadcast companies such as the BBC, not many survived as most of them were scrapped when they reached their end of service life. EMI machines where the industry standard and where used all around the world until around about 1970 when Studer came into their own with their C37 and their first transistorised machine, the A62.