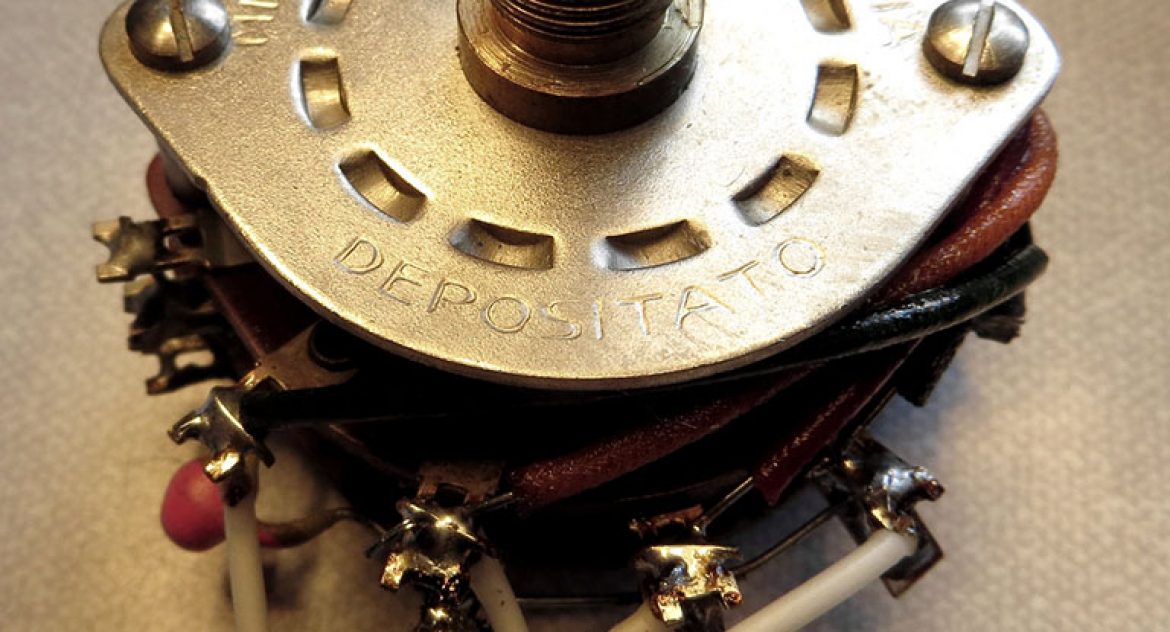 Here’s a close-up photo of the Echorec head selector switch. I’m really pleased with my wiring on this as it’s a bit neater and tidier than the original Binson wiring. Great care should be taken with desoldering the old wires to avoid breaking any of the solder tabs around the edge of the switch – this 12-way switch is a unqiue part so is effectively irreplacable, unless anyone knows of any caches of N.O.S. Binson parts. I use desolder braid rather than a solder sucker as this a bit gentler on the tabs. I can’t overstate how useful ‘Servisol Super 10’ lubircating cleaner (a blend of isoparaffic hydrocarbon solvent and mineral oil) is on a job like this. It removes, tarnish and residues such as dried up old grease. It can damage some plastics, however is perfect on vintage parts like this which are just fibre board and metal – it’s made the switch look and perform like new.

I wasn’t convinced that the original wiring was trimmed to length as well as is could have been so decided that I will undertake the final wire trimming once the unit is assembled. This will make it easier to accurately trim each coax cable to each head so that it looks tidy. The wires are trimmed to a length of just under 12″ which allows plenty of room for manoeuvring them around later on. The last thing you want is for one to be too short when the unit is assembled – that would be a tragedy.

Hi Phil ! Nice job! Really enjoyed your posts about the Binson echorec rebuild, they're really helping as I am too spending countless hours rebuilding this fine machine I got from a relative. All the techs in Belgium I brought it too didn't want to go near it as it was too "weird and specific" so I just decided to go for it and am currently in the process of rewiring it.I have a few questions regarding some wiring (mine came with a few hangin wires and even some custom mods) that still remain unanswered to this day and I was wondering if maybe I can shoot you a direct email, that is if you have time for this of course!Thanks in advanceYannick

Hi Yannick, I'll help if I can. All the best, Phil