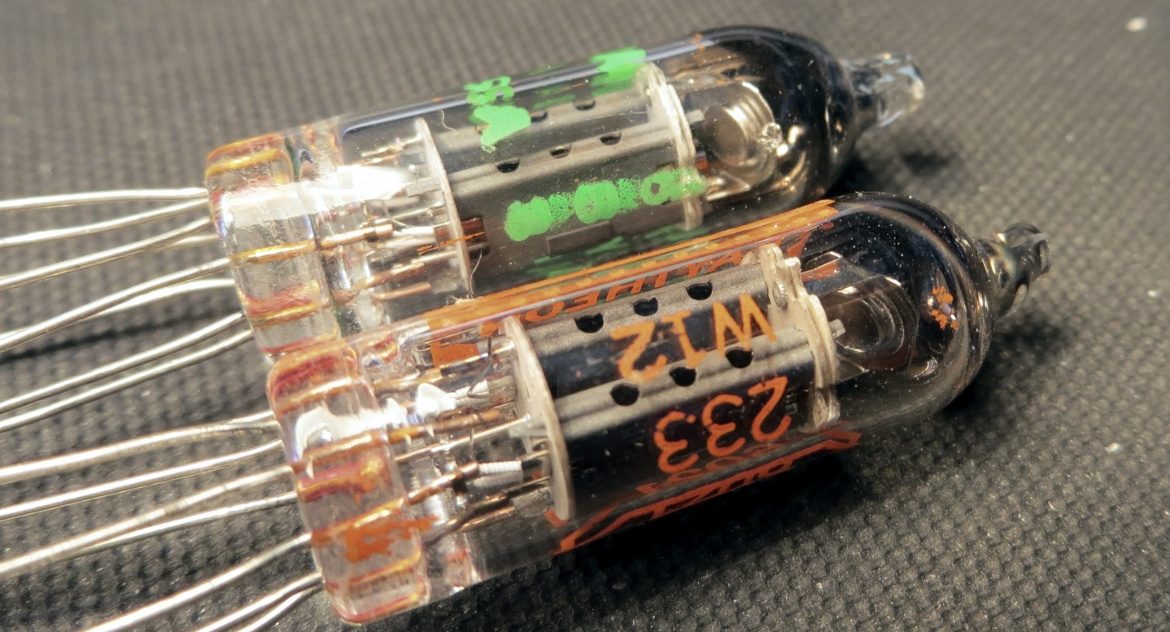 It’s no exaggeration to say that here at Effectrode we’re committed tube anoraks, but even we get duped every now and then. Take a close look at the photo above. In the red corner, weighing in at precisely 3.4 grams (SI measurements made with Mrs E’s digital weighing scales, which are specially calibrated, being traceable to standards held at the National Physical Laboratory), is a ‘Raytheon’ 6021 subminiature dual triode and, in the green corner, weighing in at precisely 3.4 grams, is a ‘Sylvania’ 6021 tube. That’s not the only vital statistic these two tubes share. The glass envelopes are identical diameter, height and shape, the plates are identical, the getters are identical, the mica spacers are identical, the spot welds between the pins and heater are identical and the electrode geometry, as far as I can tell with a watchmakers eyeglass, appears… identical. These two tubes appear physically identical in every way because the Sylvania tube isn’t really a Sylvania tube at all, but is in fact a rebranded Raytheon manufactured tube—they are the same tube. Now, you might be interested to know that Effectrode goes to great lengths to steer well clear of Raytheon subminiature tubes because, in our experience, they’re invariably much, much more microphonic and noisy than genuine Sylvania tubes made in their Emporium plant in Pennsylvania. Sylvania’s ‘green-print’ and ‘gold-print’ tubes really were the cream of the crop and are the only subminiature tubes we install, or will ever install in our effects pedals. On a final note the rebranded Sylvania tube shown in the picture is dated 1968, demonstrating that tube rebranding is no recent phenomenon and that it’s of zero benefit to the consumer.