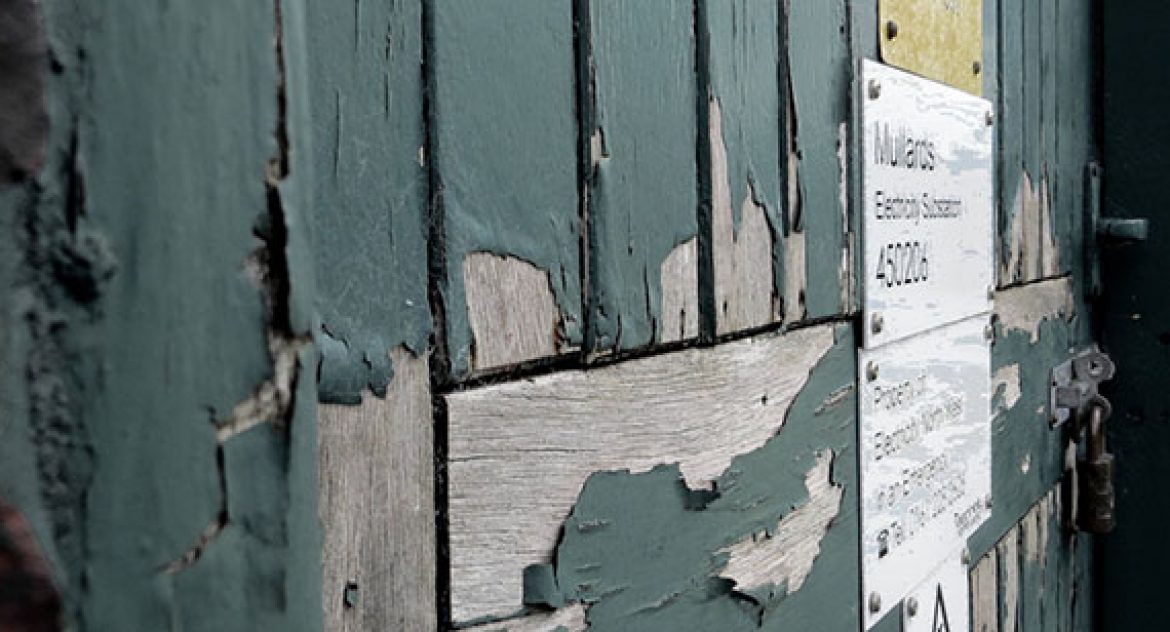 I continued to make my way around the Mullard Blackburn Works site boundary along Whitebirk Drive (A6119). I walked past a tired looking Blackburn Council street sign announcing ‘Stand Out in Darwen – Together’ (a relatively recent campaign to encourage and inspire the young people of Blackburn). I can’t help but think how this pales in comparison with the the sweeping new horizons – much larger scale, longer-term opportunities – the Mullard works afforded the people of Blackburn in its heyday – engineering apprenticeships for school-leavers, skilled assembly work, work for chemists, metallurgists, acousticians and physicists, all kinds of trades for the highly skilled and lesser skilled. I left the sign behind and continued my search for something, anything that might afford me a small glimpse back to better times and reveal a little more about the tube works and the people who once worked there.

Then, as I passed yet another empty industrial unit to let, I saw a middle-aged man walking a black dog – it seemed to me he was actually within the perimeter on the site. I quickened my pace and soon came to a path that cut through to where I’d seen him. Here I found a road sign bearing the name ‘Challenge Way’. It turned out that Challenge Way was the one-and-only road that ran through and around the entire Mullard site. Here, behind overgrown shrubs and trees, I could make out two huge circular riveted steel tanks with several smaller gas tanks scattered between them. Judging by their rusting and peeling paintwork, these tanks were part of the original site equipment and hadn’t been used for many decades. What was their purpose? Surely they were utilised for some heavy industrial process relating to vacuum tube manufacture, however I could only guess as to their precise function.

This part of the site was geographically very close to the large glass and wire drawing workshops where, in it’s heyday, in the early 1950s, produced over 2500 miles of tungsten wire every week for the manufacture of tube heaters. Perhaps the tanks were utilised as ‘pickling’ tanks to temper the tungsten wire once it has been drawn. But there was very little here to fire the imagination, even of a die-hard Mullard tube ‘anorak’ such as myself. I was becoming weary of looking at the facades of dingy old industrial units and ruinous landscapes. My interest and enthusiasm were beginning to wane and I turned back onto the main road and continued walking. And then, after a just few hundred yards, found myself back at the chemical workshop and Ribble House. I had completed a full circuit of the site.

At the entrance gate to Ribble House I paused to take one final picture of a small red brick electricity substation. It seemed so unlikey that this chunky little building should still survive here. It was as if the ongoing decline of British manufacturing and recent recession had somehow shielded it and the other workshops from being swept away by the relentless and unforgiving tide of change – not progress, just change. But for how much longer would these remnants of Mullard’s history be permitted to stand? I wondered about the Mullard employees too. All those people employed in the workshops, the scientists, engineers, technicans and girls who assembled the tubes. How many were still around and what stories they might have to tell of the Mullard works in its ‘glory days’. I imagined the energetic buzz of over 6000 workers flooding on to the site everyday. The pride and excitement of being involved in this new high technology – one of the largest and most advanced vacuum tube manufacturing works in the world. All those people retired many years ago and many of them passed away taking their stories and secrets with them.

I hope that you’ve enjoyed my nostalgic little story. If you’re interested in what the Mullard Blackburn factory was like in its glory days then do take a look at the following article ‘Speed, Efficiency & Perfection – Aims That Have Built a Mammoth Factory in 16 Years’ originally published in 1954 in the ‘Blackburn Times’ not long after the factory opened.

A year or so after writing this article I was contacted by an engineer who worked on the Blackburn site from 1985 to 1987. Although the site was no longer manufacturing tubes it was still being utilised to make filament light bulbs. A little more supplemental information can be found on the powder blending facility which was situated next to the pickling tanks.

Hi, PhilThank you for your article. Very informative, but ... sad. Such a waste to stop such famous factory in that way. Sad.Best regards from Lithuania!Armandas

Hi PhilEntertaining read about the mullards factory. I was born locally but cant really contribute much.I do know that my grandma worked there in for a spell between working in weaving sheds. I recall well as a small child we had endless fun throwing tubes that were then seen as useless technology into the local quarry to burst on the rocks. Little did I know I would take up guitar. I'm almost ashamed of the thousands of pounds worth of tubes we must have destroyed in that time.I have spent some time in and around the factory back in 83-85 when we did maintenance work for a local building contractorI also spent some time in HSLs unit a few years ago as my friend works thereRegardsLorne

Hi Lorne, Thanks for signing in and commenting. I remember when I was a kind using old records as Frisbees - we're all guilty of heinous crimes at some time!

I really enjoyed this article. Thanks so much for taking the time to create and share it.

You're welcome Jack. Thanks for letting me know you liked it.

Hi Phil, Lately I've been reading about your Blackbird pre-amp. -It sounds very cool. The thing is that I am not a guy who know a lot about electronics, so what can a pre-amp like Blackbird do for me?I have a small Fender '57 Deluxe amp and uses normally BD2 and/or Ibanez TS808 for Classic Rock, Blues and Jazz.Hope you can help - Kind regards Mathias

Hi Mathias,I've just finished writing an in-depth article on the Blackbird. I still have to add the pictures, however the article is now online: https://www.effectrode.com/flavours-fuzz-overdrive-distortion/Do let me know if you have any more questions.RegardsPhil

A extremely interesting write up on Mullard. Also sad in a way when you think of what was being achieved and what more could have been achieved had a recession and the downturn in interest in valve equipment for audiophiles and guitarists had not taken place. Time marches on and technology moves with it. But alas not always for the better. For me myself I am a Hi Fi Nut ans use all valve equipment. You simply can not get the sound produced by valves from solid state equipment. It is a debatable subject but I am sure there are many folks out there who agree with me. Good NOS valves are becoming more expensive by the day, Mullard tubes being no exception and quite understandably so bearing in mind the quality of the product. Anyway enough of my rambling I thoroughly enjoyed reading the article and although I said it before there was a tinge of sadness to realise what was lost for whatever reason in the closure of Mullard. Had they had the opportunity and market conditions to remain in business it would have Beeb anyone's guess as to what advancements they could have made in audio valve technology. Such a waste. Kindest Regads Alan

Hi Alan,I agree with you - you can't get the same some from solid-state gear as tubes. I've been working with tubes to design audio circuits for over 20 years now and I can honestly say, the more I learn about them, the more I appreciate the subtlties of their physics and construction - the devil really is in the detail (the times I've said that). I too feel a tinge of nostalgia and sadness, however also appreciate we're fortunate to still have access to this technology and to be able build and use equipment using tubes. Thankyou for taking the time to comment. Best regards, Phil