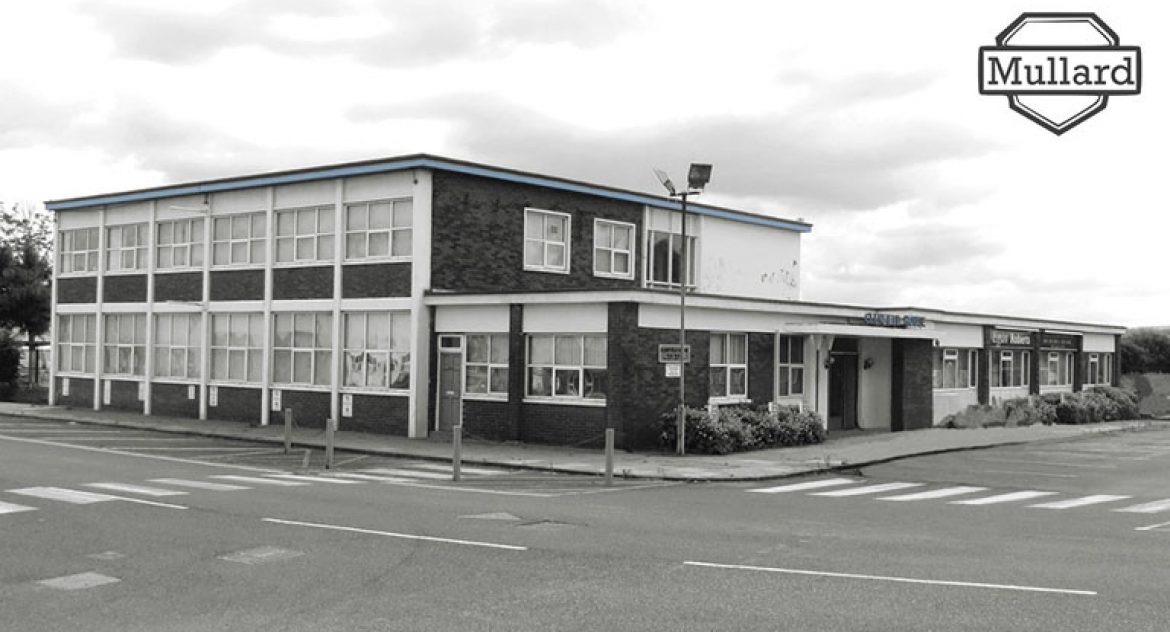 The photograph above shows the main entrance to the Mullard Blackburn site and ‘Glenfield House’ – a modern office block that was erected in 1961 for the purchasing and personnel departments. I was quite pleased with the composition of this picture which I cheekily snapped while the site security guard was hovering just a few feet from me on the phone to his boss. This part of the once mighty Mullard Blackburn Works is presently being utilised by several different companies. I had naively turned up completely unannounced (effectively cold calling, which I hate) expecting to gain access to the site and be allowed to take pictures. The guard was trying to figure out exactly just which planet I’d come from (Planet Effectrode!). There was no way he was going to allow a weirdo in shorts and sandles – even though I was enthusiastically expounding about the history of Mullard – access to the site and I certainly don’t blame him. However, they did very kindly agree to discuss letting me come back at a later date if I arranged an appointment.

A little further on, along Philips Road, there is a vast open space, the footings for some enormous building. At the time I had no idea of its purpose and, judging by its size and location, hypothesised that it might be a warehouse for storing raw materials coming on to the factory site or perhaps finished tubes and other electronic components ready to be shipped out. What it actually turned out to be was the site of the canteen that served the multitudes of employees. The building was demolished sometime around 2006 – another piece of Mullard history swept away and forever lost by the tide of ‘progress’.

However the history of this part of the site hasn’t been entirely obliterated. Film footage of inside the canteen and surrounding buildings still survives in the form of a 1962 British drama film, ‘A Kind of Loving’. The film shows scenes from within the technical drawing and typing departments and gives some fascinating insight into the everyday lives of the employees and what it must have been like to have lived and worked at the Blackburn site. This also got me thinking that this would be beautiful opportunity for an institution such as the BBC (or even a small independent film company) to create a wistful and nostalgic documentary about Mullard. Afterall, there were strong links between Mullard and the BBC from the early days – it would be wonderful to see an hour long BBC ‘Horizon’ style television documentary with old footage of the factory and interviews of any of the staff that could be found. But is there anyone out there who even cares enough about this stuff to make it happen. . ? Part 6 – Aerial View of the Mullard Blackburn Site

Thank you for this. Such a shame more people do not know about this once very important place.

Thank you so much for all this. Such a shame that more people do not know about this once very important place.

I just put away a set of Blackburn EL34's that I purchased recently. They sound Killer! I wish this company still had these tubes coming out of that factory, but alas, so goes the old guard, in with the new I guess....but, they forgot about those musicians and their pesky amplifiers! um did I leave out the audio gear heads....not! JRL