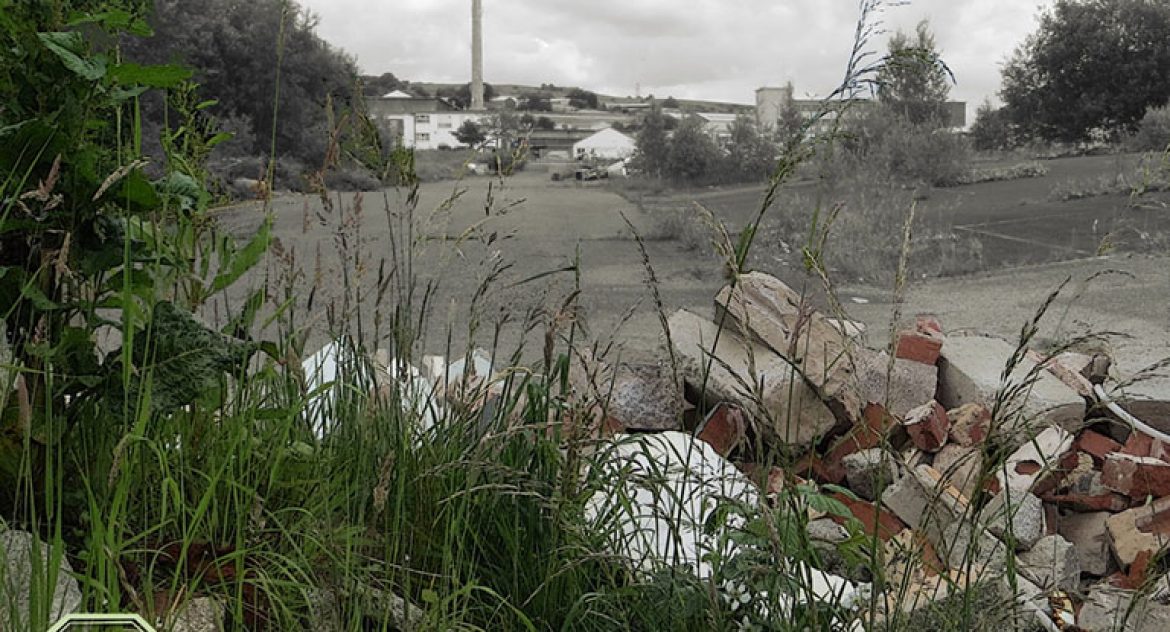 Tubes in the Rubble and Ruins

I certainly wasn’t going to let a pesky little thing like security and administration spoil my day out at Mullard. Undeterred, I decided to scout around the site perimeter to take a few more pictures and followed Philips Road towards the south boundary. I turned on to Blakewater Road and stopped to take this photograph showing a deserted landscape of rubble and broken masonry amongst which brambles and grasses were growing – the ruins of a recently demolished building. Stretching into the distance is Challenge Way and to the north is Ribble House and the car park where the hydrogen and oxygen production plant was once located. I took a little artistic licence with the photograph and manipulated it on my computer (using ‘The Gimp’) to remove the colour from the buildings in the distance whilst retaining the colour in the foreground – the idea being to give the impression of looking back into the past when the works was in its heyday to contrast that with the dereliction of the site today.

It’s easy to imagine that perhaps there’s a cache of tubes and disused equipment laying buried and forgotten on this part of the site. There are several tales in circulation regarding this and other anecdotes about what happened to all the tooling, machinery and documentation used to manufacture these tubes. One story goes that in 1985 there were over 2 million tubes stored in one of the Mullard warehouses. Philips decided they needed the space to rent out and made arrangements to have all the tubes dumped and buried somewhere on the site. In hindisght this might seem like implausible, a fairytale, however tube production at Blackburn had already ceased back in 1980 and the workshops were utilised for light bulb and T.V. tube manufacture (around this time the site still employed 1500 people). Tubes were no longer fashionable in the hifi, professional audio and even the guitar industry – yes, there was time when tubes were not cool and solid-state gear was in vogue. The last Mullard Blackburn ECC83s were manufactured in 1979 and production of power tubes ceased not long after this.

As for the tooling, there are rumours that New Sensor Corporation acquired it and relocated it to their Xpo-Pul factory (also known as Reflektor) in Saratov, Russia when they began to manufacture reissue 12AX7 (properly ECC83) Mullard tubes. However, the materials and construction of these new Russian ‘Mullard’ tubes are substantially different from the geniune article – surely New Sensor wouldn’t go to all the trouble and expense of procuring and relocating the Blackburn tooling, production line machinery and documentation only to then not use it. Another rumour is a tale telling of how electronic component manufacturer, Matsushita in Japan acquired the tooling in the early 1980s when Blackburn stopped tube production, but there’s no evidence or pictures to substantiate this either.

But this is mostly conjecture – here are the facts. What is known is that Blackburn Microtech Solutions (formed from the former Philips Components organisation/Mullard Radio Valve Company) were still manufacturing cathode-ray tubes for televisions through the 1980s up until relatively recently in 2009. Over the decades Mullard had diversified into manufacturing all kinds of electronic components for radio and T.V. They utilised their expertise in thermionic emission technology, materials and fabrication processes and shifted the emphasis from audio vacuum tube manufacture to cathode ray television tube manufacture. In its later years Mullard continued shedding staff and contracted in size withdrawing from the outer buildings to leave them empty and derelict. But the spirit of Mullard remained in the centre of the site. Situated on Challenge Way between the old wire factory and two of the adjacent component assembly buildings, Microtech Solutions survived as a specialist supplier of increasingly obsolete cathode-ray tubes used in old-fashioned T.V. sets. They may or may not have retained some vestige of the original equipment and documentation from the “glory days” but, most importantly, they did retain some of the Mullard engineers; the boffins who possessed the knowhow on making tubes. How do I know this? Because Microtech actually began manufacturing audio vacuum tubes again in 2009. Part 8: The Last Tubes Made on the Blackburn Site