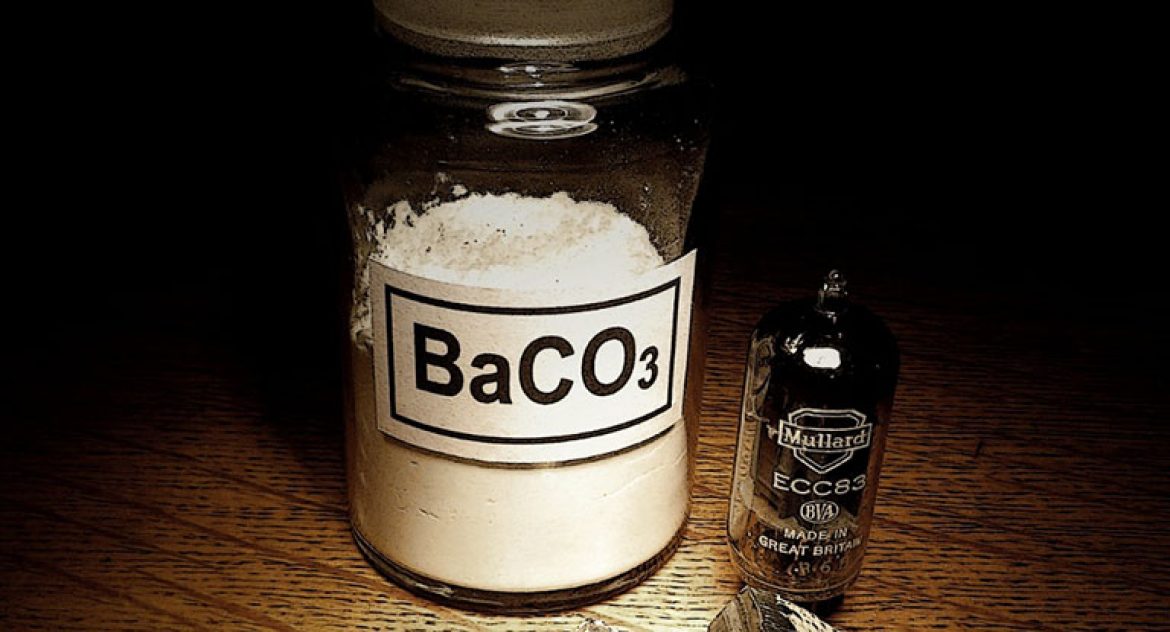 Secrets of the Tube Alchemists

Well not so much alchemy as chemistry, and physics too, and, even worse, maths. It turns out all those mind numblingly boring subjects my teachers worked so hard to drum into me during my school days are of vital significance to guitar tone. But as an 11 year old boy, I was, quite rightly, focused on other, more important stuff such as hanging out with my mates and an increasing fascination with the fairer sex. Suffice to say the classroom more often than not failed to hold my attention—all that dry, lofty knowledge of ages was, for the most part wasted on me. It wasn’t until later on in life that I learned the value of a good education.

But now, many years later, I see the world through the eyes an electronic engineer, a ‘know it all’, and am fascinated with the factors that affect guitar tone. For instance, the physical principles that shape the sound of vintage AlNiCo pickups with scatter wound coils, or the properties of polypropylene that make it an eminently suitable choice of dielectric material for use in audio coupling capacitors and what makes a good vacuum tube. There’s plenty of information to be found in guitar magazines and on the internet about pickups, electronic components such as capacitors and resistors, and even guitar amp circuits, but discovering anything useful about that critical thermionic component at the heart of your amp circuitry, well, that’s a different kettle of fish. There’s nothing of real substance to sustain the appetite of a hard core tone enthusiast on vendor websites and modern tube manufacturers aren’t exactly a font of knowledge either—there’s little in their literature regarding the actual construction and quality of materials utilised in their tubes.

Frustrated by this lack of information there are a few guitarists who plunge onwards in their quest for tone seeking knowledge inside dusty electronics texts from the 1960s. This is truely a quest for the bold, for within those yellowing pages are the arid terrain of experimental data, chemical formulae and physical equations, an all but impenetrable read, unless you happen to be an engineer. Such books are loaded with jargon, the language of boffins from a stuffy, bygone age, containing words like ‘oxidation’, ‘reduction’, ‘decomposition’ and ‘activation’. But wait: this is not an entirely alien language. I vividly recall my very first science lesson at secondary school where our young, and quite pretty, science teacher instructed us perform an experiment. She set up a bunsen burner and tripod on top of which a crucible was placed containing a small piece of chalk. The Bunsen burner was used to heat the chalk (calcium carbonate) until it crumbled and decomposed into calcium oxide and carbon dioxide gas. Despite being hopelessly distracted by her smile and dark eyes I somehow managed to at least learn something in science class.

This decomposition is essentially one of several processes that occur during the manufacture of a vacuum tube. The cathode in the tube is coated with a layer of metal (barium, strontium and sometimes calcium) carbonates and these are decomposed by heating to form an electron emissive oxide layer that coats the cathode. But tube manufacture isn’t all just basic school chemistry—some of it’s advanced level! There are many subtleties to the engineering of these thermionic devices, for instance, the purity and composition of the nickel alloy from which the cathode is made is of vital importance—even the smallest excess or lack of certain trace elements will cause degradation in the tube’s performance and adversely affect its operational life. Too many impurities in the nickel result in the formation of a high resistance layer between the nickel and oxide coating shortening cathode life effectively killing the tube. Too few impurities will lead to poor emission as it will not be possible to “activate” the cathode.

Activation is achieved by heating the cathode above its normal operating temperature and sometimes a current is drawn whilst at this elevated temperature. This results in impurities in nickel base “reducing” some of the barium oxide coating to create free barium atoms (a single barium atom for every one-hundred barium oxide molecules) within the oxide coating, vastly increasing its emission capability. This is just one of several manufacturing processes the cathode undergoes to optimise its emission performance and life span. Whilst being heated the tube is also being continuously vacuum pumped to purge it of any residual gases and other contaminants released from the metal electrodes during heating—if these are not removed they will react chemically with the cathode gradually “poisoning” it to cause a decline in its emissivity. Further, a current is drawn during activation which affects the distribution of barium atoms in the cathode to enhance its emission performance. It’s essential that the tube undergoes this “aging” process and that it is adhered to rigidly, otherwise the tube will perform poorly—very poorly, in fact in many cases the tube will be useless for hi-fidelity audio applications.

This short article has barely scratched the oxide coated surface of vacuum tube manufacture, even so, it’s still ended up being a little over technical in places, and I apologise for that. The important message to take home from all of this is that the development of a tube, such as the Mullard ECC83 (12AX7) was the result of a systematic international engineering effort that spanned many decades and the audio performance of this tube, and tubes in general, is dictated to large extent by the nickel alloy composition and processing of the cathode—an incredible feat of engineering. Knowing this fact puts the reader on a much stronger and surer footing when purchasing tubes. For instance, he or she may question the validity of ‘cryo-treatment’. Simply cooling a tube down to cryogenic temperatures cannot alter the relative quantities of trace elements within the nickel alloy of its cathode—these trace elements ultimately determine electron emission, so just how is cryo-treatment supposed to improve the electron flow characteristics within the tube? Or one might question modern eastern tubes bearing the brand names of once great tube manufacturers of yesteryear. These new tubes aren’t manufactured with the same metallurgy, construction or expertise as tubes made in the U.S.A. and Great Britain back in the 1960s—do they really perform as well as the tubes from which they are claiming heritage? You’ll undoubtedly receive some interesting, and possibly entertaining, responses once you begin asking questions along these lines.

Finally, in closing, it often feels like there is an perpetual war where science is battling against a vast, surging sea of marketing hype and nonsense that pervades the audio industry. I hope this article in some way helps to educate, inform and holds the ground against this unrelenting sea—here we make a stand for what is good and true.

You can find out more about the details of tube manufacture in this old film produced by T.E.O. Department Film Unit which contains excellent footage of the various wire making, chemical plants and assembly workshops situated on the Mullard Blackburn site—the largest and most advanced tube manufacturing facility in Britain and, for that matter Europe. The raw materials were transported in and everything was made on site! Entirely manufactured in Great Britain!

Video makes $200 for an NOS Mullard seem somehow reasonable. Has anyone ever attempted to tally the number of operations involved?

You could try asking Bob at Brimar UK - he should be able to give you a comprehensive answer on the number operations required to manufacture a vacuum tube: https://brimaruk.com/gbvp-2/great-british-valve-project/

Hello, Very interesting read. Don't understand all the tech as I'm a beginner. I do know the BS of hype and how new tubes are far from the tubes from the 50.s RCA, Mullard. I have purchased many NOS tubes. Question; What current manufactures do you thinking are making good quality tubes? With that said Happy Holidays and wish you the best! I purchased th Blackbird and love it. It's so good and thank you for caring about tone and quality. Best, Chuck

Hi Chuck, I like JJ Tubes. They're the only modern tube manucturer I use or trust. You can find further information here: https://www.eurotubes.com/store/pc/who%20is%20jj%20electronic.htm All the best and Merry Christmas, Phil

Thanks very much for another interesting article, Phil. As one who is fascinated by the chemistry, materials and electronics engineering magic behind the nuances of audio vacuum tube characteristics, you can count me in for more. I'm in awe over the accomplishments of the past. I'd love to take my time machine back to 1958 or 1959 for a completely techno-geek exploration of valve (and guitar) manufacturing.

You're welcome Thom, Thanks for your comments. Best regards, Phil

I truly wish I fully understood the science involved here. I was transfixed, what a great read and really well written. I’m fascinated by this subject and would love to know more. Any suggested reading material would be greatly appreciated?