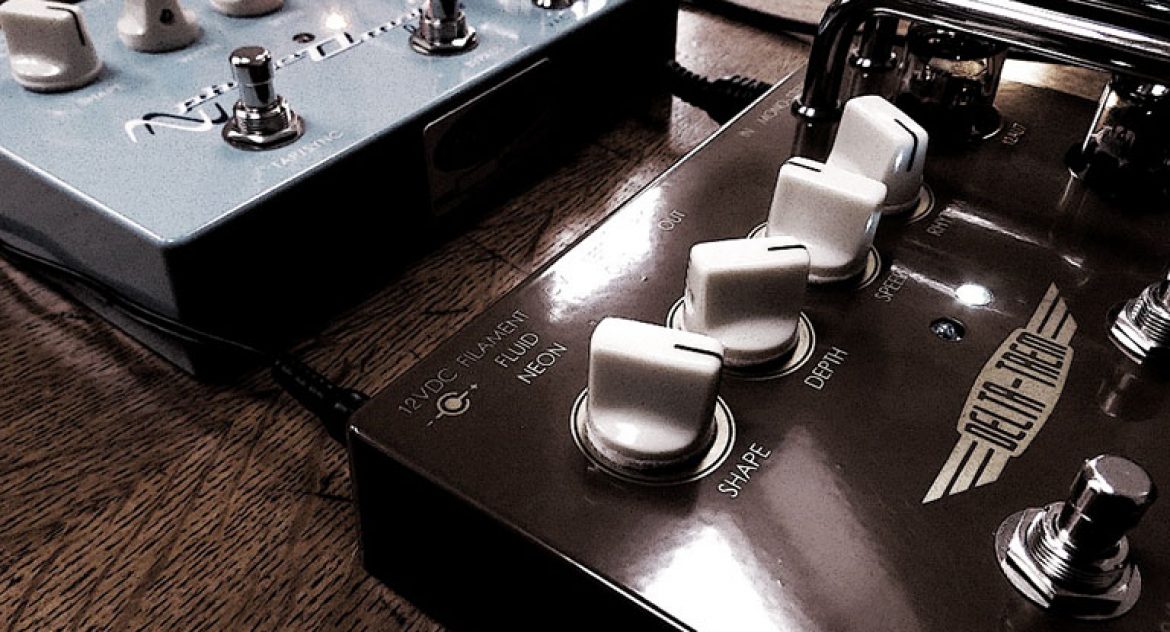 Although it’s been a good few months since my last update on the Phaseomatic tube phaser I can assure you I’ve been steadily beavering away in the Effectrode laboratory and making headway on this pedal and the Delta-Trem tremolo. In fact both pedals are fully operational and communicating with an external tap tempo controller, which means they can be synced to the same BPM — a colossal triumph for Effectrode engineering! I’m now fine-tuning the tap tempo circuitry so that both pedals can be accurately beat matched with the aim of getting them to stay locked in synchronisation for at least the duration of a complete song, hopefully a little longer. This fine-tuning and tweaking process represents the closing stages of a long eight year development period for the Phaseomatic and Delta-Trem pedals and it’s good to see both projects finally coming to fruition. So, all the vital elements are there for a couple of unique and astounding effects pedals: tap tempo, dozens of waveform options and rhythmic patterns, dual L.F.O.s, cool retro graphics, photo-optical control and, of course, an all-tube signal path. For those that need to know, the tap tempo circuit performs a running average on successive presses of the tap tempo footswitch, however averaging resets if there is greater than 5% error in timing. In practice this means that any human timing errors will be gradually averaged out as you home in on the beat, but the averaging will reset immediately if your timing is sloppy or you decide to change your mind about the tempo, for instance if changing from quarter note to eighth note foot tapping. To summarise, a great deal of thought has gone into designing the tap tempo so that it works as seamlessly and accurately as possible.

After a short break I’ll be back to focusing efforts on the Echorec 3° Delay. That’s all folks!

Phil,There's a "new" board sitting in my studio that's been sitting there pretty much unused for the past couple of years. It started out as a small portable board for gigging. I put a Blackbird and a PC-2A on there; liked them so much I added a Tube Vibe. Heard about the Delta Trem and have been waiting for that to be released. Made room for the new Phaseomatic when that was a rumor. It's been a while and I've removed the existing Effectrode pedals and have been using them on a different board. Sure would like to replace them on the original board for the full Effectrode experience.Robert M.

Hi Phil, thank you so much for the update post regarding the Phaseomatic Deluxe and Delta-Trem. I cannot tell you how excited I am to learn that you have entered the final stages of research and development and the untold number of hours you have put into perfecting both pedals. I am absolutely certain that the wait will be well worth it. Very much looking forward to having both of these pedals in my Effectrode arsenal! I still believe you design some of the finest tube-based, or any, pedals in the business. I am fortunate enough to own the vast majority of the Effectrode line and have never been let down by the incredible sonics each of your pedals is capable of producing. Kudos, Phil!!! Fantastic job, as always.

Hi Chris, Thank you for your kind words - it's always nice to hear that Effectrode pedals are doing good work in the service of musicians. Will be doing a little more testing on the Delta-Trem and Phaseomatic pedals next week. Not long before there are a reality now! Best regards, Phil