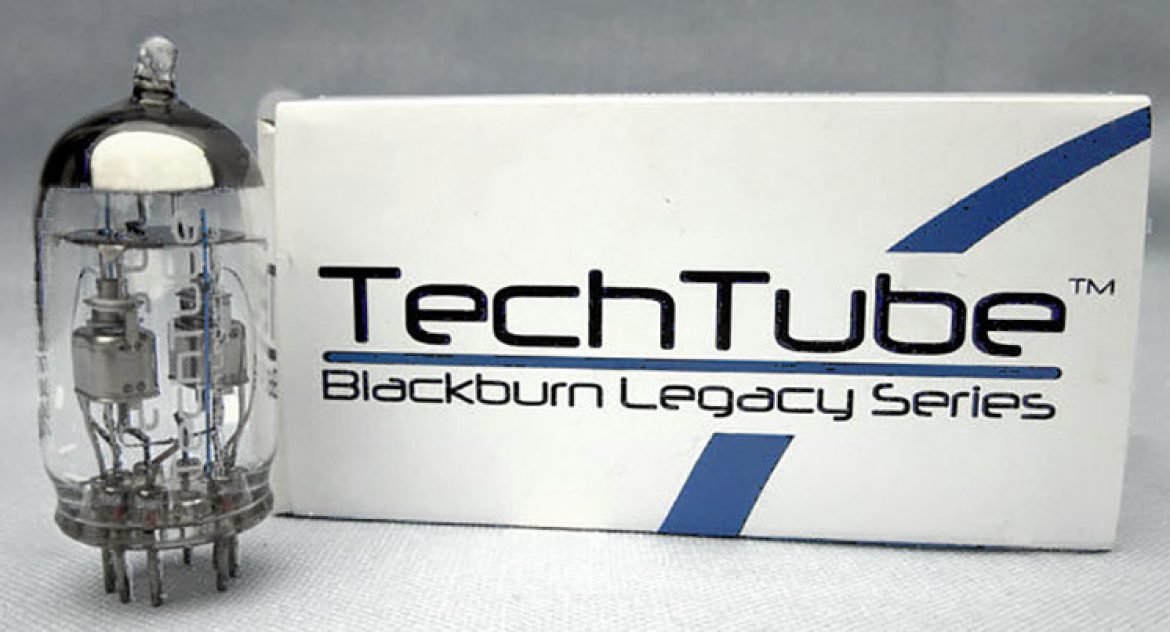 The Last Tubes Made on Blackburn Site

After almost 30 years the Blackburn site was manufacturing tubes again – 100% British made tubes! The TechTube™ Blackburn E813CC was a serious engineering effort to redesign the ECC83 dual-triode from the ground up with an improved specification. First impressions are that the glass envelope of this new tube is not as elegantly shaped or as aesthetically pleasing as the old Mullard tubes however what’s of real interest is what’s inside. On closer examination it can be seen that the internal construction is completely different from a typical ECC83. Instead of concentric electrodes where the heater is at the center and surrounded by the cathode, grid and anode like the layers of an onion, the E813CC has a much simpler planar electrode structure. Undoubtedly this was simpler to fabricate, reducing the requirement for manual assembly. Microtech were not using the old Mullard ECC83 tooling, but were leveraging their existing cathode-ray tube manufacturing capability to create an audio tube with an utterly unique cathode construction. These guys were the genuine article, real engineers with a passion for what they were doing. They really did know their stuff, a few of them had served apprenticeships in the Mullard workshops and there are still references to the patents they hold relating to improvements in cathode materials for thermionic tubes.

Technically there were several electronic performance advantages to the planar construction and new cathode. Firstly, the cathode heater drew only a third of the current that a typical tube does – from the data sheet 122mA verses 300mA. This meant the tube ran cooler and because of this would have lent itself not only to use in amps but more compact tube gear such as effects pedals and on-board guitar preamps. Secondly, the inter-electrode capacitance was much lower than a normal ECC83 because of the lower surface area of the planar metalwork. The grid to cathode capacitance was specified at 0.4pF (25% of that of a traditional valve) and a grid to anode value of 0.9pF (50% of that of a standard valve). In a real-life situation this could lead an improvement of tone in some amps as it would open out the high frequency response, but it would have also led to problems in higher gain amps with cascaded gain stage circuitry. High gain amps such as Boogie and Soldano are finely tuned to create their distinctive musical overdrive and distortion response. This is in part achieved with a combination of higher value grid resistors working in conjuction with the electrode capacitance of the tube – the overdrive circuitry is designed around the tube. If the tube capacitance is altered then the frequency response will be affected and this will almost certainly be detrimental to the balanced tone of the amp – tube amp designers Mike Soldano and Randall Smith didn’t spend all those late nights in their workshops tinkering and experimenting for nothing.

The E813CC was initally announced in September 2008 but wasn’t released on to the market until July 2009. The engineers wanted to ensure this tube was the absolute best they could achieve and had been involving guitarists and hi-fi enthusiasts in audio listening tests along the way to get feedback on its tone quality. It’s my understanding that some of the audio listening tests had deemed the tube to be excessively microphonic (sensitivity to picking up and amplifying external vibration) which is an issue with all tubes to a greater or lesser extent, old and new. And putting a tube in a high gain application such as a guitar preamplifier section is effectively like putting it under a powerful microscope – look hard enought for flaws like microphony and you will find them. The small dimensions of the electrodes might not have helped the situation either as they would surely ring at a higher resonant frequency yielding a noticably different microphonic signature to a traditional tube. Something else out of the ordinary to pick up on.

But the design team stoically took on board these criticisms and undertook further research in an attempt to engineer out the microphony. Their published conclusion was that it was possible to reduce the microphonic pickup however the tube did not sound subjectively as good. Now there is something in this. If a tube is capable of picking up a little ambient vibration or sound in a controlled manner, it will add more depth, body and sustain – a guitar players dream! However this not in the mainstream thinking (…yet) and certainly something the Microtech team could have perhaps done without being ‘bogged down’ with at this stage. They had been keeping potential customers informed of techincal difficulties every step of the way and I can’t help but think that their honesty and commendable efforts to show willing might have in some way damaged customer confidence. They were even shipping tube dampers with tubes – which aren’t guaranteed to be an effective solution – it doesn’t inspire confidence.

Sadly the glory of this new and innovative tube was terribly short-lived – Blackburn Microtech Solutions went into administration in September 2009 – just a few months after they’d started shipping out their first new tubes. I’m so disappointed that this valiant attempt to bring the Blackburn factory into the next decade with new production advanced tubes didn’t take-off. They had ambitious plans to release other tubes as well as the E813CC (ECC83 equiv). They anticipated expanding their portfolio of tubes to E812CC (ECC82 equiv) and E811CC (ECC81 equiv) signal tubes and then looking forward to EL34, EL84, KT88 and KT99 power tubes. This kind of innovation is something that’s sadly lacking in the tube industry which is currently suffering from a severe case of rebranding – endless rebranding of Russian manufactured tubes – a crass marketeering effort to associate average quality tubes with the once great names of Mullard, Tung-Sol, Svetlana and the like with no serious scientific research effort into making a genuine contribution to the art of tube manufacture. Even JJ Tubes have caught the bug and are now selling ‘Telefunken’ reissue tubes. It’s disappointing that there are no companies out there who can step-up to the mark and take on the worthy engineering challenge of manufacturing a true replica of a Mullard ECC83. NOS tubes are demanding higher and higher prices as stocks dwindle and they become scarcer. This coupled with the uncertainty when purchasing second-hand NOS tubes makes the idea of new super-quality tube a highly desirable commodity for enthusuiasts and audiophiles.

But I’m rambling. There’s still a little more of the old Mullard Blackburn Works to see and the rest of my story to tell. Part 9

Thankyou to Neville Roberts for kindly supplying the photograph of the closeup of the E813CC tube. You can find a copy of the original article in which this photo was published online.

The cracked glass will have been down to poor annealing after joining the base to the jacket. A very basic error. Normally this can be checked using polarised light. (I used to work in a lamp factory - 99% of valve manufacturing processes were "stolen" from the already long-established lamp industry.)

Sorry to hear that. A big loss , because these little tubes are among the best i ever had in my tubed preamp . the two in my preamp are are stil working for 15 years or so.

I bought two of the E813CC straight off the line having pre-ordered them. Initially I tested them and whilst they were a little bit mechanically noisy for guitar, they made beautiful, bright, bold, slightly less gainy tubes for bass reproduction. I suspect they would have made lovely hi-fi tubes had I tested them at the time. Anyway, they were safely tucked away in their boxes in a drawer never to be seen again until just now in late July 2017. Having not been moved in all this time, I open both boxes to find two cracked tubes. One has a uniform split all around the glass envelope, and the other a crack across the base. It would appear that the glass envelope was simply not strong enough for the vacuum within and environmental changes (pretty stable in a centrally heated house in the south of the UK).I'm wondering if anybody out there has any of these surviving?

Sorry to hear that Damien - that's something I've never heard of before - tubes just cracking as you describe. They must have been some kind of internal stress in the glass envelope from manufacture I guess...

Sorry to hear of the failure of the devices, Damien. Would you considering selling one of them? Thanks.

Damien,A little late coming across your comment here; but I have eight of these tubes here in the USA... Your comment made me pull them out and check them.Right now (March 2018) they all appear to be intact; I examined them closely with an LED flashlight... I will say I'll be more careful with them, though. Some of the bases do seem to be very thin.Here's a thought though, I'm at a very high altitude (about 1000m ASL) - so this makes me wonder; there's less pressure differential up here in the mountains and perhaps life has been easier on them because of this.It's certainly a shame that this venture didn't work out. I was really hoping Blackburn's legacy would continue and this really was the last chance. I think this was them trying to save the factory after the CRT lines dried up - (which was the last thing they manufactured) - and that these E813CCs were actually based on the latest CRT technology....I hope we do see something new in regards to tube manufacture someday, but I do feel we may not...