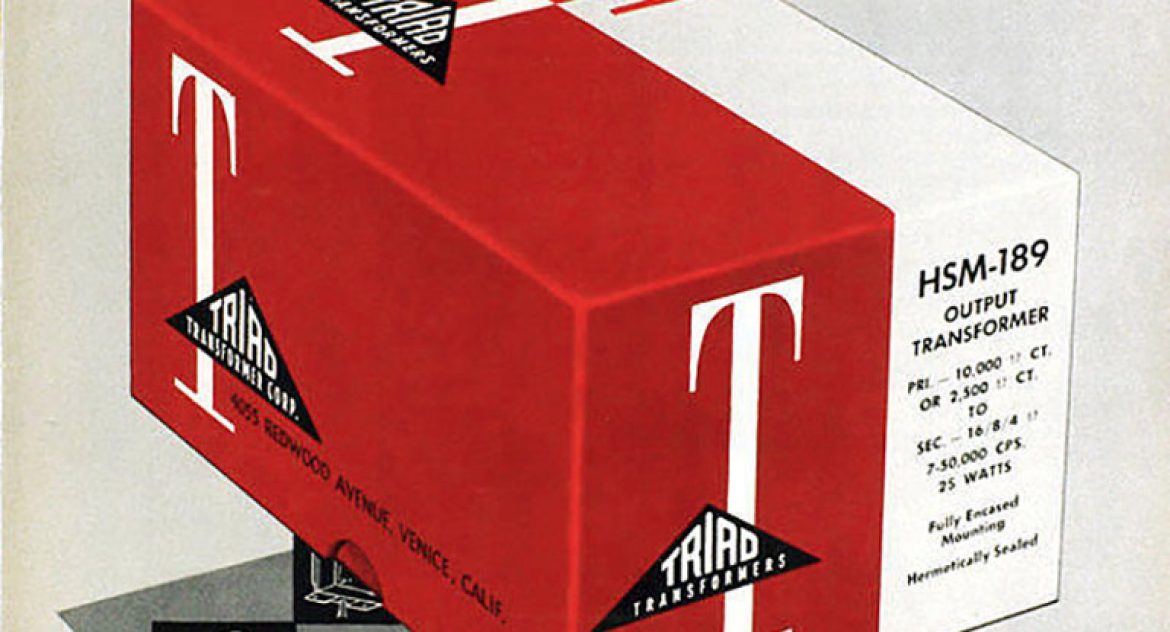 The Triad Transformer in the Blackbird Tube Preamp

The ‘Blackbird’ vacuum tube preamp has a dedicated output especially for direct recording. This output is fully isolated and balanced using a 600Ω miniature Triad output transformer driven by a class AB circuit – just like a real tube amp. This imparts some additional sweetness and harmonic overtones to the Blackbird’s tube circuitry. The tone quality is so natural and pleasing to the ear that speaker emulation often isn’t even necessary when recording direct. All that’s usually required is a little equalisation and some reverb to create beautiful, warm, full-bodied guitar tone. From the Triad website – “For over 60 years, Triad has been an electronics innovator and a leader. Lewis W. Howard founded the company during the 1940s in Venice, California. He was a graduate of UC Berkley, a co-founder of the Wescon Trade Show and was recognized as a life member of IEEE for his contributions to the industry. In the 1950s, Triad first helped Leo Fender and surf guitarist Dick Dale turn up the volume on amplifiers, which led to the birth of Rock & Roll. Triad was next the dominant supplier to the TV industry in the 1960s. Transformers from Triad also supported the Apollo mission to the Moon, and then the first microwave ovens in the 1970s. Triad has returned to its roots in Southern California with a 22,000 square foot modern engineering and service center, which is located in Corona.”

Could I use 600 ohm bal. output with guitar poweramp or fx return for additional sweetness and harmonic overtones?

Hi Kerry, Yes you can. Just use a standard mono (TS) guitar cable and the balanced out will have about he same output level as the normal out on the Blackbird.

Thanks again...you're the one who could give me the right and real answer. Thanks again. Ciao

What is the difference between the first generaton (the ones without the triad tranformer (0 to around 100 serial number) and the ones with it ? Since I own one without the triad, what would be the improvements in regard of the new one? Tanks for your precious answer.Richard

Hi Richard, The original Blackbird tube preamp has a discrete inductor/capacitor (analogue) speaker emulator to emulate a Jensen C12N speaker (my favourite speaker for a Fender Twin Reverb). The newer Blackbirds have the transformer which allows additional flexibility on the recording output. Both are excellent direct recording ouputs and some very professional results can be obtained with the new or old versions.

That's quick answer Phil, it's appreciate. Last question: can I put a delay before the BB , in order to go from balanced out of the BB directly In the mixer ? Because if I start with the BB going in the delay, going in the mix after, how do the balances outputs will act ? Thanks Phil...this little forum have already answered a lot of question. Love your stuff...Effectrod new fan here .

Yes, place your delay before the Blackbird - just like you would with a a guitar amp. The Blackbird is exactly like the input stage of a tube amp.Thanks for the feedback on my pedals :)