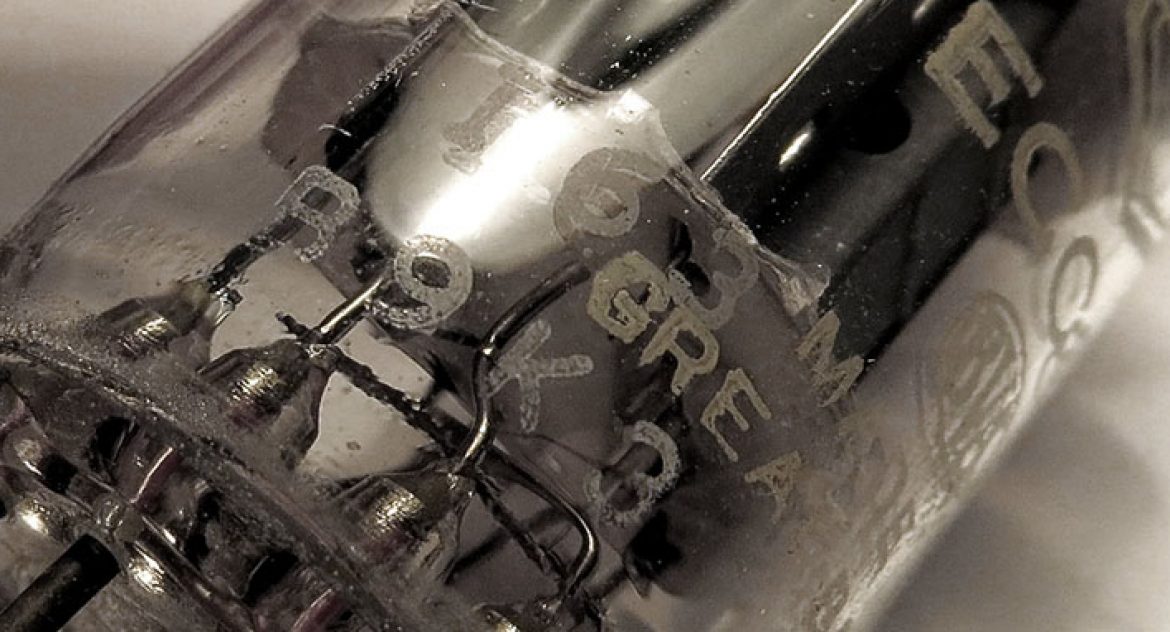 My recent visit to the Mullard Blackburn factory got me interested in identifying the origin of the few Mullard tubes I own. The factory, date of manufacture and revision of a particular tube can be determined from a code that’s etched into the side of the glass envelope (the colour of the lettering, i.e. yellow-print or white-print has no bearing on the quality of the tube). Looking at the photograph of the Mullard ECC83 it can be seen that the code is written in two lines. The top line is the three character ‘Engineering Change Code’ which would have allowed engineers to keep track of the various revisions of tubes as they endeavoured to improved their performance and reliability. The first two characters signify the tube type, in this case ‘I6’ indicates the tube is an ECC83. The third character signifies production changes that were made to the tube over the years, for example ECC83 tubes could be etched with ‘I61’, ‘I62’, ‘I63” or ‘I64’. Close examination of any of these ECC83 revisions reveals differences in construction and materials utilised in its manufacture, for instance support rod metallurgy (copper or nickel), getter support type, anode coating reformulation, etc. Sadly, Mullard destroyed all their production documentation many decades ago when they ceased tube production, which means there is no written record of the manufacturing changes and how they affected tube performance.

The bottom line is the date code is which is composed of four characters if the tube was manufactured after 1960 or three characters prior to this date. The first character represents the factory code. Below is a table of the most significant European factories/plants for Mullard-Philips tubes:

The second character indicates the year of manufacture. For the date code shown in the picture, the ‘9’ indicates either 1969 or 1979 depending on the change code. Tubes manufactured during the late 1960s into the 70s were marked with the engineering change code ‘I63’.

The third character indicates the month of manufacture:

And the fourth character is the week of that month. This ECC83 tube was manufactured in the Mullard Blackburn factory in the 3rd week of November 1969. This gives just a brief insight on how to interpret those cryptic codes etched into the glass. More in-depth information on how to identify Mullard, Philips and other European tube types such as Amperex and Valvo can be found on Brent Jessee Recording & Supply website or by referring to this old Philips tube code list. Any additional information on this subject, especially the engineering codes is most welcome. It would be fascinating to know what the improvements were made as the code was revised from ‘I61’ through to ‘I66’. Part 5 – The Mullard Purchasing Department and How to Freak Out a Security Guard

Hello I have some Mullard EL34 tubes with factory marking;Xf2 B3H1Xf2 B3L1I understand B is Blackburn, but whatt are the other figures? Thanks. Lars Gunnarsson Stockholm/Sweden

Hi Lars, The other letters and numbers represent the manufacture date and revision. Best regards, Phil

Hello,I read different articles on your site with great interest and find it very informative. Thank you!I have a question about this article and was hoping you can shed some light on it.Since the change code "3" in I63 represents 12AX7s made after 1965, how can you determine this tube to necessarily be a 1969 and not possibly a 1979 one?Thanks again! Ziv

Hi Ziv, You might be able to determine the vintage of the tube from the Mullard shield logo or perhaps internal construction.