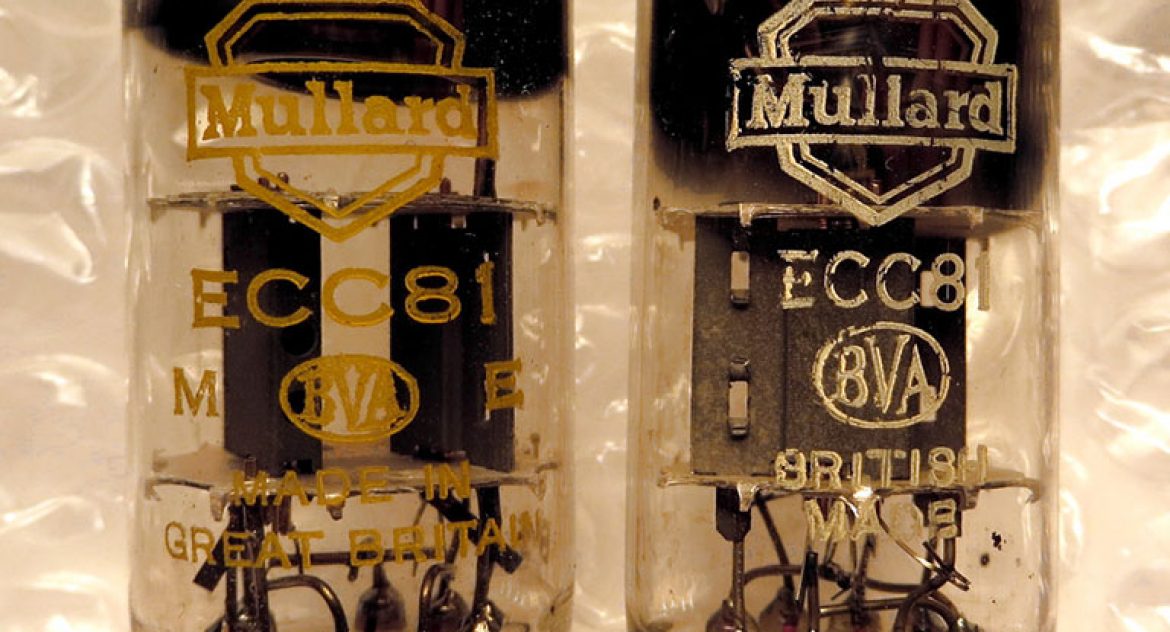 There’s a popular misconception that the yellow-print Mullard tubes were manufactured using higher quality materials and construction than white-print tubes or that they were specially selected for their superior quality. This myth may have arisen because within weeks of Mullard’s yellow print era ending, they made other changes to production, including discontinuing using copper plate posts in their ECC83’s. However there are plenty of older white-print tubes with copper posts as shown in the photograph of yellow and white-print ECC81s. If you look closely you can see that the construction of these two tubes is identical – the anode boxes are the same, the micas are the same, both tubes have copper posts – they were made using the same tooling. Note the BVA logo on the tubes, an acronym for “British radio and Valve manufacturers Association”. The BVA was a cartel of radio tube manufacturers established in Great Britain specifically to protect their interests from foreign competition – undoubtedly a line of defence drawn against mighty American manufacturers such as RCA!

Additionally, there are no documents, press releases by Mullard or advertisments in old electronic magazines claiming yellow-print denoted better quality. Why would Mullard manufacture special quality tubes, print them in a different colour, and then never ever publish a single claim? Manufacturers are always more than eager to blow there own trumpets when it comes to getting the edge over their competitors. If any such claim had ever been made, someone would certainly have discovered it by now.

The truth of the matter is simpler and far more interesting. Mullard was founded in 1920 by Captain Stanley Mullard and 1970 was, therefore their golden anniversary. To commemorate this significant event Mullard decided to use a different colour print on their tubes. The tubes were originally intended to have the print in gold paint, however for technical and financial reasons, yellow was substituted. The yellow was planned to be on all tubes manufactured during the anniversary year, with some production lines starting to use it at the end of 1969. Yellow print was applied to all the tubes Mullard sold in the British commercial market, including all Mullard-branded, lower-quality, foreign-made imported stock, without exception, however Mullard’s CV (military, etc.) -printed valves, and those for export from the UK, were always printed white. During the year, and especially towards the end of it, as lines ran out of paint, they would refill with whatever colour was to hand, and so you could have adjacent lines turning out valves marked in white and yellow. According to the The National Valve Muesum, an overlooked, unused drum of the yellow paint was found several years later in 1975. Rather than waste it, Mullard Blackburn production tubes once again were painted in cheerful yellow lettering until the drum was finally exhausted!

So there you have it. Although there are no technical reasons why there should be any audible difference between yellow-print and white-print Mullard tubes, this little story does provide further fascinating insight into the state of British tube manufacture at its zenith. Finally, another point of interest is that Captain Mullard was a keen rose enthusiast and to commemorate Mullard’s golden anniversery, a new rose was bred and planted around the Mullard factory and offices. I wonder if any of the rose bushes survive today amongst the tangled waste of brambles and weeds on the long neglected Mullard Blackburn site..?

If the yellow label Mullard's were made in the 1970's then why do all the numerous examples I own all have date codes reflecting a 3 year production period of 1962-1965?

Hi Dave, Mullard did utilise yellow paint over the course of the 1950s and 60s to label their valves. It's my understanding that these yellow-print valves were designated for use in electronic equipment, such as radiograms, portable record players, etc made by other manufacturers, whereas individually packaged valves for retail sale were printed in white paint.