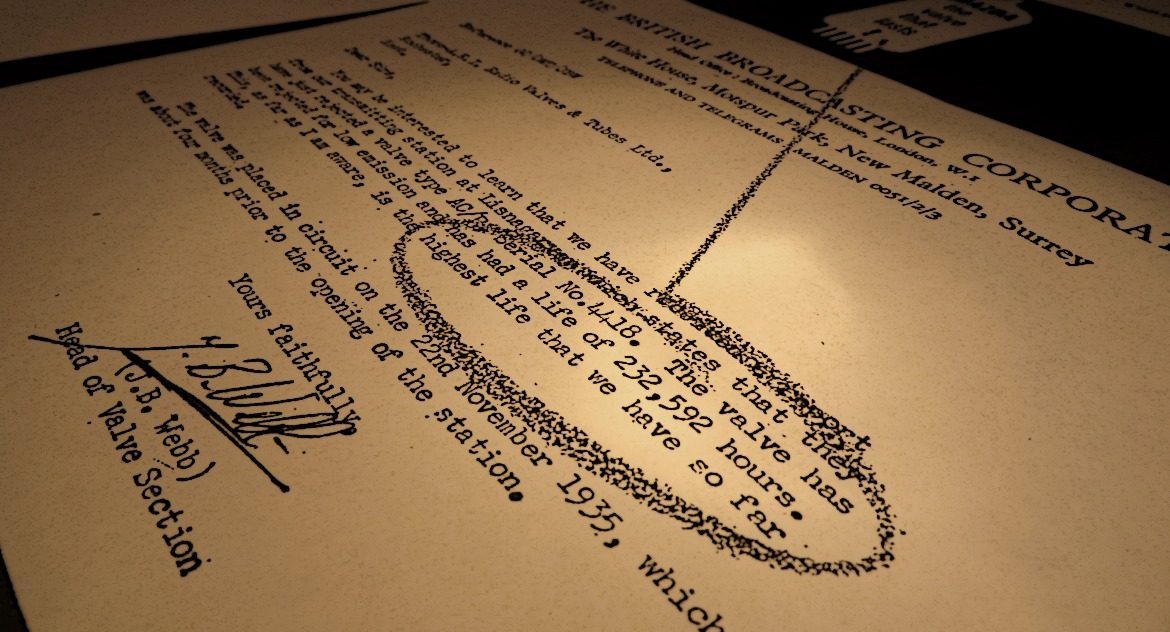 How long do tubes last?

A lot, lot longer than you might think. The picture above shows a letter written by the BBC (British Broadcasting Company) back in 1962. They were so blown away by the longevity of a Thorn (Mazda/Brimar) tube they took pen (well, ‘Remington’ typewriter) to paper to thank Thorn for their superlative workmanship—the tube had operated reliably and continuously for over 26 years! Like the Thorn tube above, the lifespan of the tubes in Effectrode pedals are measured in tens of thousands, even hundreds of thousands of hours.

Moreover, the vintage Sylvania tubes utilised in our smaller effects, such as the PC-2A compressor and Fire Bottle were built to exacting military specifications. These fantastic thermionic marvels can operate at altitudes of 80,000 feet, withstand 1000G acceleration, temperatures of over 200°C and high radiation levels; conditions that would rapidly destroy transistorised electronic equipment. Sylvania’s aerospace grade tubes are extraordinarily resilient; tough enough to operate in extreme environments, such as hypersonic jet aircraft, guided missiles and the vacuum of space; they can even withstand gigging and touring; even teenagers jamming at home.

So why does the belief persist that tubes should be replaced regularly or that they’re somehow less reliable than other electronic components like capacitors, resistors, potentiometers, switches, etc? Well, the vacuum tube is a close cousin of the electric light bulb (a.k.a. the incandescent or filament lamp). In fact, the first tubes were essentially modified light bulbs made by the electric lamp companies. The tube almost certainly gets a bad rap because of its kinship and physical resemblance to the short-lived light bulb. Light bulbs are notoriously unreliable; most last a pitiful few months, or just weeks before burning out. A bulb’s rated life was often printed on the outside of its packaging. Just a 1000 hours: a terribly brief time to shine.

This short lifespan begs the question: couldn’t the electrical engineers of the day have done better? Well, they did. However, a dubious deal between several big American and European corporations put paid to all their wonderful technological progress. On January 15, 1925 General Electric, Philips, and others founded the “Phoebus Cartel“. The cartel sought to gain control of the incandescent lamp market so they could to increase prices and decrease the life expectancy of light bulbs in order to maximise their profits. The Phoebus cartel were crooks of the worst kind. Worse than those shrewd, soulless shysters, the BVA (British Valve Association), who conspired to fix European tube prices in an attempt to outcompete imported American tubes. As bad, even, as the self-serving Etonian riffraff that profess to ‘govern’ our fair shores today.

The enduring legacy of the Phoebus cartel was to engineer a shorter lifespan into the fabric of countless billions of filament light bulbs—great job guys. Fortunately this kind of “planned obsolescence” never found its way into the vacuum tube manufacturing process. All available evidence (technical literature, vintage electronics books, magazines and periodicals) indicates only forward progress, that is continuous development of vacuum tube technology to improve performance. Tubes utilised in laboratory instrumentation, computers and military communication systems had to be reliable; people’s lives depended on it. It’s too bad this ethos didn’t permeate the domestic light bulb market: the world would have been a brighter place for it.

Don’t get me started. Led is terrible in applications like car headlights and task lighting. Quality incandescent lighting is increasingly expensive and hard to find.