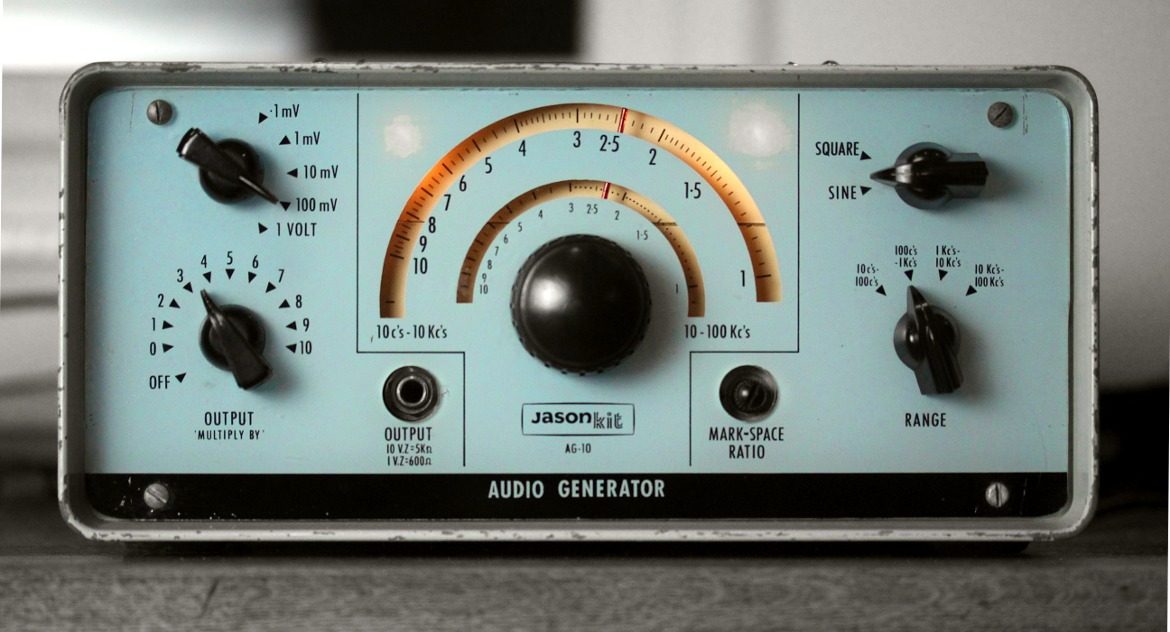 There’s something magical about the sound of tube amplification and effectification. The warm, burnished tone of recorded music or an instrument (especially electric guitar!) reproduced through a vintage tube amp is something to be savoured, like a good bourbon or handcrafted beer. But vacuum tube sound synthesis equipment like the Jason ‘AG-10’ audio generator (pictured above) has its own unique mojo going on too, possessing a visceral, organic quality not found in the circuits of solid-state (transistorised) equipment.

Now, you may not have heard of the Jason AG-10, but you’ll almost certainly have heard it—this thermionic gadget was utilised by composer, Delia Derbyshire to create the smooth, glassy tones of the ‘Doctor Who’ melody. There’s absolutely no doubt that Miss Derbyshire created something wonderful back in 1963, but how much did that tube signal generator really contribute? After all, the AG-10 is simply test equipment, originally designed and intended to output a pure sinusoidal waveform. So it’s reasonable to question if it really sounds that much different to any old transistorised signal gennie? Don’t all pure sinewave generators sound alike, whether they’re transistor or tube?

Well they would, if our technology was as perfect as that of the time lords on Gallifrey. But it isn’t. In the real world there are always technical flaws and limitations of one kind or another. A closer look (using ‘Audacity‘) at AG-10’s output reveals the imperfections. Zooming in to the sample level, it can be seen that the sinewave is slightly misshapen, distorted and not a true representation of simple harmonic motion, aka a pure sinewave. This adds colouration to the fundamental frequency so it sounds subjectively richer, more complex and more interesting to listen to. Further, the amplitude varies—ever so slightly—over time. The AG-10 is breathing; it lives!

Things become even more imperfect when the ‘square’ setting is selected. The squarewave exhibits noticeable sloping of the ‘mark’ (top of the wave) and ‘space’ (bottom of the wave). There’s also a fair amount of ‘ringing’ (oscillations) on the high-to-low and low-to-high transitions. The AG-10 is a far from perfect waveform generator. Not good, if you happen to be an engineer in search of perfection. But, for a musician looking to add texture all these idiosyncrasies introduce the desirable qualities of depth, richness and complexity to a performance.

Back in their halcyon days, when angels trod their hallowed corridors, the BBC Radiophonic Workshop possessed an entire bank of twelve Jason AG-10s. Each AG-10 was tuned to a specific note on the Pythagorean scale: C, C#, D, #, E, etc. These were triggered via homemade electronics and could be played just like a piano. This approach to musical synthesis, like creating tape loops, was an expensive and time-consuming way to make electronic music, but at the time it was the only way. With today’s technology the process is now shamefully easy: simply digitally record (sample) a real instrument and then play it back with a MIDI controller keyboard.

The demo sound clips below were made using 15 second long ‘Waveform Audio File Format’ (wav) samples of the AG-10. Samples were taken of all note pitches on the 100c/s-1Kc/s range. All the samples were then edited in ‘Audacity‘ to ensure each began at 0° phase (the start of the wave) and finished at 360° phase (the end of the cycle)—this means the samples can be looped seamlessly. Finally, the samples were imported into ‘Polyphone‘, which was used to save them as a ‘soundfont’ (SF2) file. Voilà, the Jason ‘AG-10’ is digitised and ready to play.

In the following two sound clips the AG-10 is set to output a sinewave. It’s an enchanting tone, like the sweetest electric piano imaginable and, it’s polyphonic too!

In these next two clips the AG-10 is outputting a squarewave. The first clip is a recreation of Delia Derbyshire’s melody for ‘Dance From Noah”. 100ms attack and decay times were tweaked in FL Studio’s ‘DirectWave’ sample player to create a more flute-like sound.

This second track has more of a 1980s feel. There are two tracks of the AG-10 (arpeggio and melody) laid over synth bass and drums.


In closing, it has to be said, the Jason ‘AG-10’ audio generator samples are quite inspiring, more so than the many dozens of preset sounds on my modern digital synth. I’ll definitely be employing the warm, honeyed tones of the AG-10 again at some point in the future, to make more retro music. But for now it’s back to the land of guitar effects for me: there are four new Effectrode pedal designs calling for my attentions. Mr Puccio knows what I’m talking about…