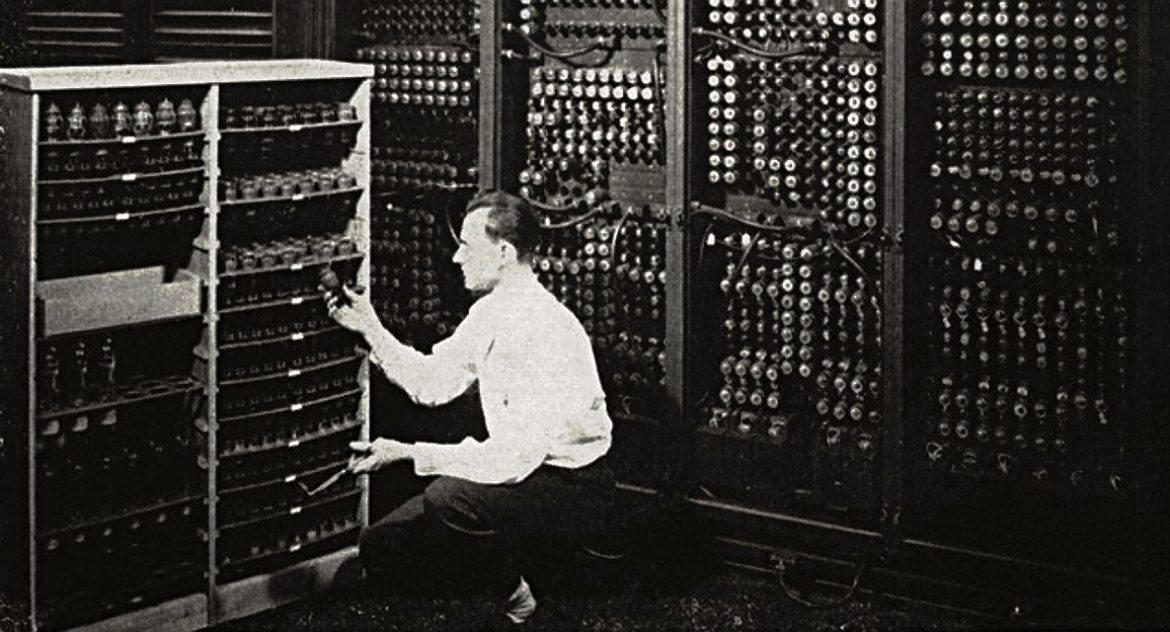 Possibly… but there are a few factors to consider before installing old “computer rated” tubes in a guitar amplifier or an effects pedal. Firstly, early digital computers, such as ENIAC (Electronic Numerical Integrator and Computer) pictured above contained many, many thousands of vacuum tubes. Every couple of days or so a tube would fail and require replacing. As you can imagine locating the faulty tube, removing and replacing it with a new one was no picnic for ENIAC servicing engineers. Tube reliability in these vast, complex machines was of paramount importance.

Consequently tube manufacturers began investigating methods to improve the tubes utilised for this specific application. Computer tubes such as the type ‘5963’ were designed with longer cathodes, which had a large surface area for the electron emissive oxide coating. This extended the operational life of the tube. The cathode could also be held in ‘cut-off’ for long periods of time without causing any detrimental effects to the performance of the coating. Further, the plate was designed to operate at lower voltage resulting in lower power dissipation. This meant the tubes ran cooler resulting in reduced thermal stress on the micas and metal electrodes within the tube’s glass envelope, again helping extend tube life.

Secondly, “computer rated” tubes were never graded for noise (hiss and hum) or microphony (sensitivity to picking up vibration). There was no need, as the tubes were not operating as analogue amplifiers but digitally where they were either “on” (where electrons are flowing) or “off” (‘cut-off’ where no electrons flow). Such a system can tolerate huge amounts of self-noise and microphony and still perform without any problems. This is not the case in a linear amplifier, particularly a preamplifier amplifying small signals, where the tube is biased in its linear region—these kinds of systems are especially prone to microphony and noise.

So, computer tubes were designed for high reliability, but zero effort was made by manufacturers to optimise their performance for audio. What does this mean in real money? Well, looking at the datasheet for the ‘5963’ it can be seen that it has the same pinout heater voltage, characteristic curve, amplification factor and plate current as a 12AU7. The only thing to watch is the maximum plate current, which is a little lower than the 12AU7. It will work as a replacement. However, expect higher sensitivity to vibration because of the large plate structure and the fact that no efforts have been made during design and manufacture to ensure low microphony. A better 12AU7 replacement would be the type ‘5814’—this tube was constructed with extra thick support micas (some mil-spec versions had additional micas inserted too) to increase the rigidity of the cage to minimise microphonics.

Eric Barbour of Metasonix designed some analog synthesiser modules that utilise computer and other tubes not originally intended for audio use (schematics on web, for non-commercial builders only). Following Eric's example, it would be good to see some of Phil's DIY ideas or projects published online sometime soon.

Hi Chris, there are some of my circuit diagrams online already of an early version of the Phaseomatic tube phaser