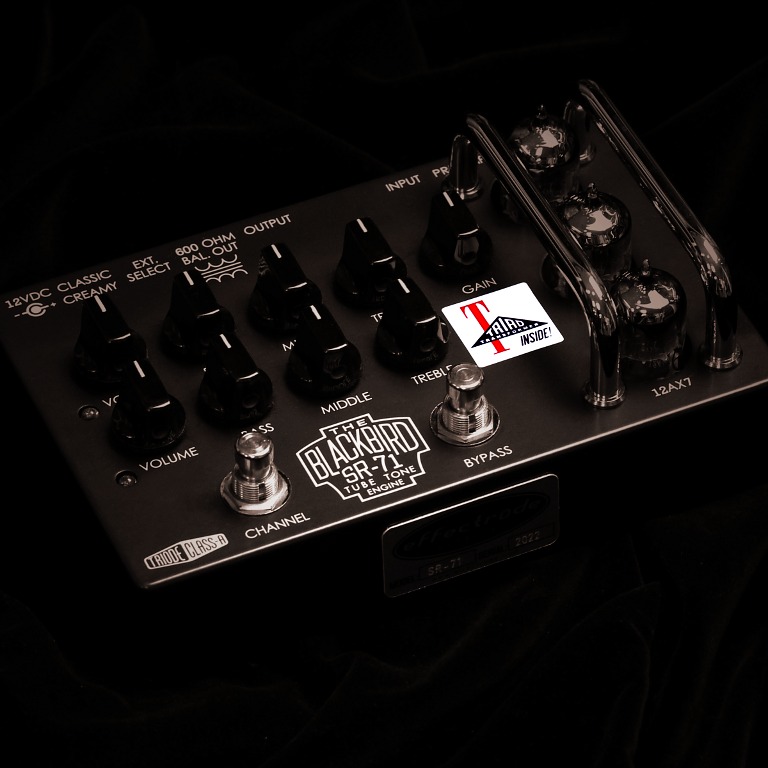 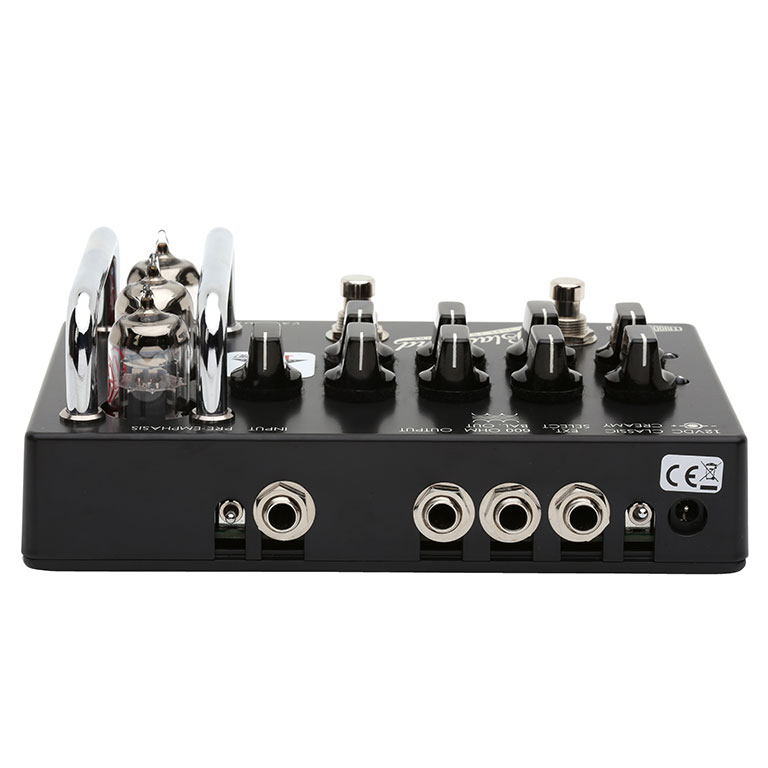 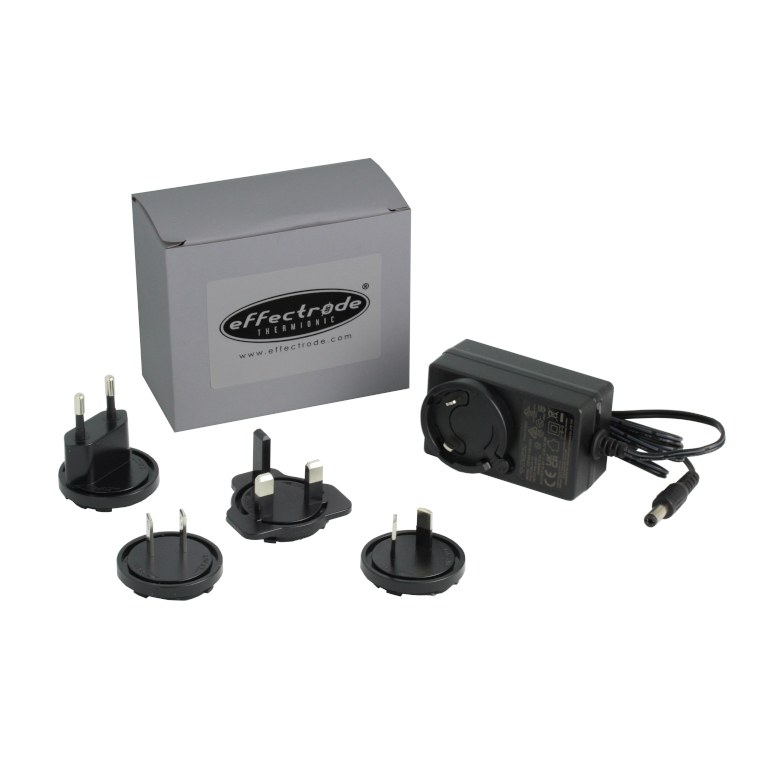 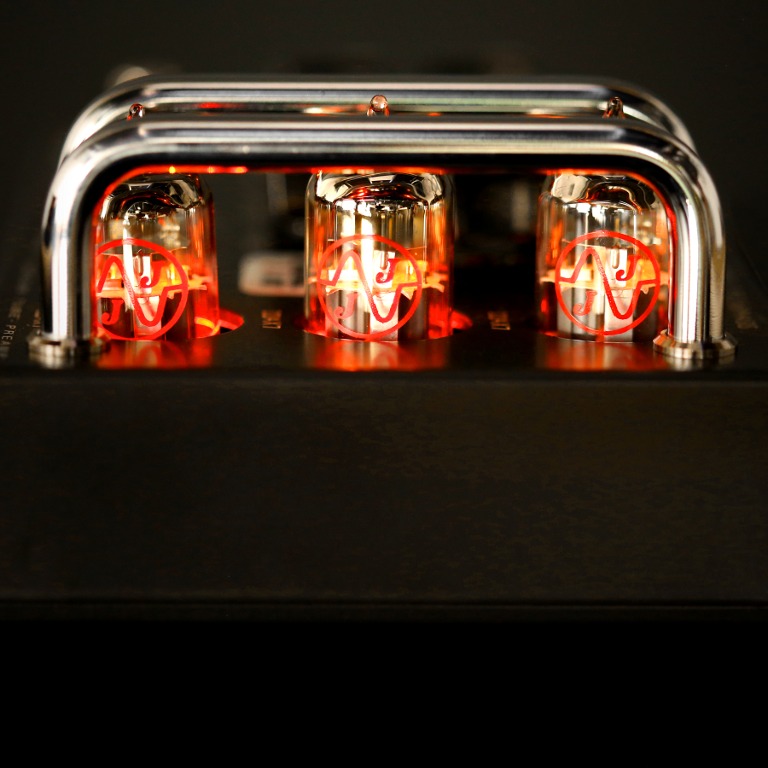 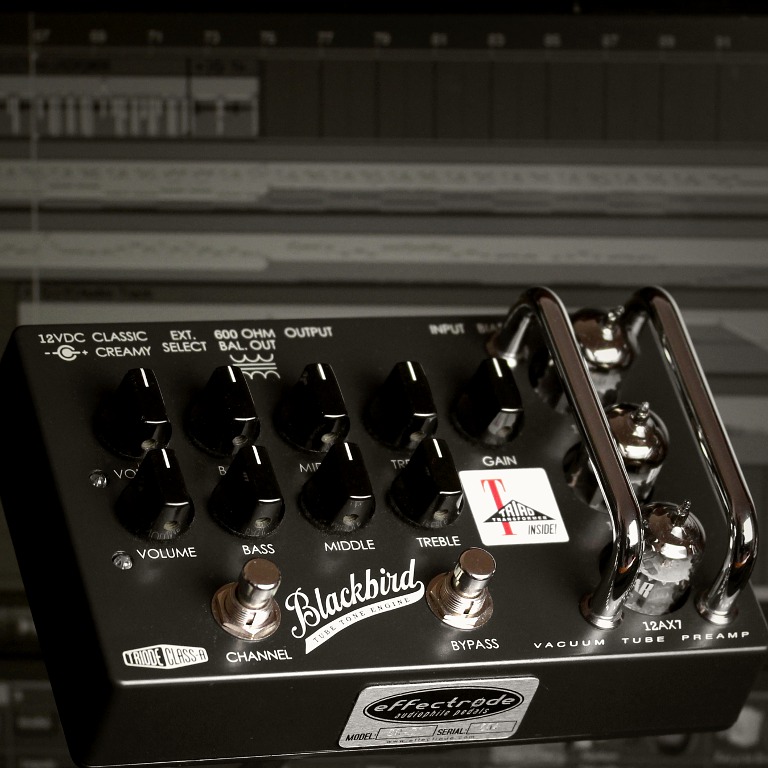 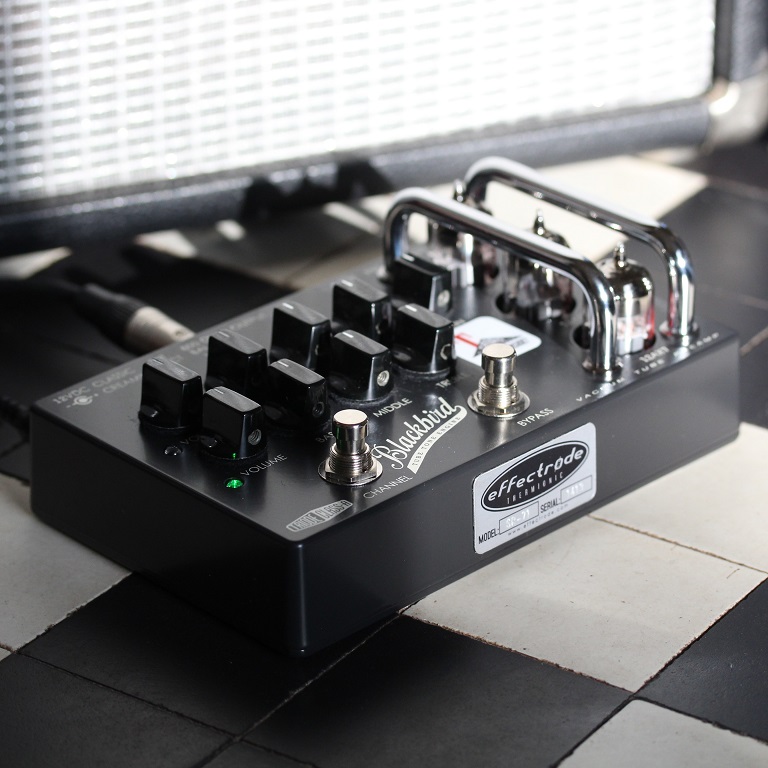 The real McCoy! The SR-71 Blackbird™ ‘Tube Tone Engine’ is a genuine all-tube preamp in a compact pedal. Designed for great versatility, the  SR-71 adds additional clean/drive/distortion channels to vintage/boutique guitar amps or works as a professional stand-alone direct recording tube preamplifier. The clean channel possesses a beautifully pure, ‘glassy’ character and audio circuitry within the drive channel is tuned to generate a rich, full-bodied and devastatingly smooth overdrive.

“If distortion can be described as ‘beautiful’, this is it.” – The ToneQuest Report

The Blackbird™ ‘Tube Tone Engine’ is a genuine all-tube preamp in a compact pedal. This versatile preamp is designed to give guitarists access to a wide palette of burnished, rich guitar sounds whether recording direct to computer in the studio or when used with a tube amp in a live situation. The tone of the drive channel is best described as, “bourbon & honey” being voiced for a full-bodied, warm, bluesy overdrive and the clean channel has a beautiful, ‘glassy’ character.

As the gain knob is rolled-up the overdrive fattens up beautifully to become a complex, rich distortion full of depth and even harmonic overtones. The gain channel also features a second, entirely different voicing (“Creamy” mode) which hot biases the tube circuitry, adding more odd harmonics to thicken up the soup for some devastating classic rock, crunch and harmonically-saturated guitar sounds. This channel utilises exactly the same dynamic and touch sensitive all-tube clipping circuitry found only in an elite few hi-end guitar amps. By simply digging in or easing off with the guitar pick the tube circuitry responds musically and works with you to create soaring expressive solos and its natural tube compression means you can effortlessly transition into rhythm or chord playing.

The clean channel has a beautiful, pure, glassy tone that lends itself to country and jazz playing, however because it’s a replica of the ‘Blackface’ tube circuit, it too can be pushed into breakup and overdrive with higher output pickups or a booster pedal. A huge engineering effort has gone into developing and refining the thermionic circuitry in Blackbird and as a result of this the tone and feel of the pedal is superbly balanced—guitar tone really does not get any better than this. Again, this channel has great depth, clarity and richness—a polished, classy sound that tubes excel at.

The Blackbird preamp can be further ‘tweaked’ (a formal engineering term) to allow players sculpt their own truly unique signature sounds. The character of the overdrive response can be altered by adjusting tube bias points and swapping out tubes giving access to a virtually unlimited range of classic and undiscovered amp voicings. And it’s a tone hound’s dream—discovering bargain tubes, trying them out and seeing what effect they have on the guitar’s sound. In the time it takes to change a light bulb a tube can be swapped out for a NOS (new old stock) vintage type such as Mullard, Sylvania, RCA, etc altering the gain, biting point, response and fundamental tone of the Blackbird.

Bassists! The Blackbird also works superbly with electric bass—its input stage has an excellent low-end response and can effortlessly handle the higher output from bass guitar.

Special thanks to all these musicians, especially John Verity, Phil Taylor (of Gilmour music) and Paul Stacey, who have helped and advised over the Blackbird’s long two year development period.